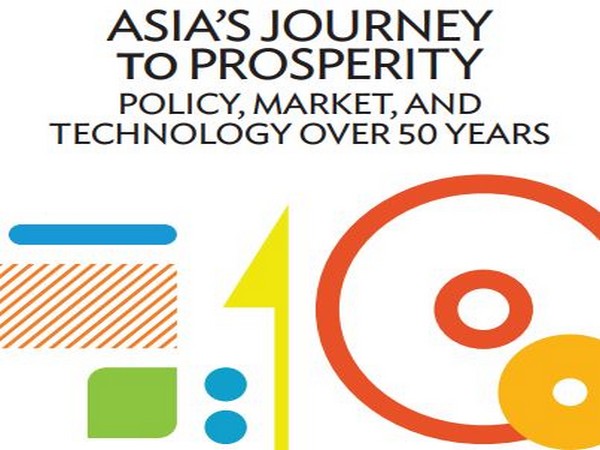 Manila [Philippines], Jan 15 (ANI): Sound economic policies and strong institutions have transformed Asia and the Pacific over the past five decades into a centre of global dynamism, according to a new book from the Asian Development Bank (ADB).

The book titled 'Asia's Journey to Prosperity: Policy, Market and Technology over 50 Years' explains the reasons for Asia's economic success while cautioning against complacency.
Developing Asia's share of global gross domestic product (GDP) rose from 4 per cent in 1960 to 24 per cent in 2018. Including Australia, Japan and New Zealand, the share increased from 13 per cent to 34 per cent.
During the same period, developing Asia's per capita GDP grew 15-fold (in constant 2010 dollars) from 330 dollars to 4,903 dollars, boosting incomes and lifting hundreds of millions out of poverty.
"In 1966, developing economies in the Asia and Pacific region were very poor. There was pessimism about prospects for industrialisation and broad development. But the region's performance over the past 50 years has surpassed expectations by any measure -- be it economic growth, structural transformation, poverty reduction or improvement in health and education," said ADB President Takehiko Nakao on Wednesday.
The book emphasises that there is no such thing as a unique 'Asian Consensus' in the region's journey to prosperity. Rather, the policies pursued in Asia can be explained by standard economic theories, not so different from those prescribed by the 'Washington Consensus' set of policies.
Economic transformation in the region came about in much the same ways as in many developed economies. What was important was that many Asian countries took a pragmatic approach. They implemented import liberalisation, opening up of foreign direct investment, financial sector deregulation and capital account liberalisation in a sequential way and based on meeting certain conditions.
In the past half century, many Asian countries enjoyed a demographic dividend and benefited from rapid technological progress, globalisation and the generally open trade and investment regimes of developed countries. However, even with favourable demographic and external conditions, the process of economic growth is not automatic.
Asia's post-war economic success owed much to creating effective policies and strong institutions. It was supported by governments' pragmatism in making policy choices, decisiveness in introducing reforms and an ability to learn from their own and other's achievements and mistakes.
In many countries, a clear vision for the future, which is often championed by forward-looking leaders and shared across a wide spectrum of social groups, contributed to broad-based growth and made a difference, especially when backed by a competent bureaucracy.
The book notes that Asia should not be complacent and that it is too early to describe the 21st century as the 'Asian Century.' Developing Asia still faces pockets of persistent poverty, increasing income inequality, large gender gaps, environmental degradation and climate change.
Millions still lack adequate access to health, education, electricity, and safe drinking water. Nakao said it will take more time for Asia to become as influential as the West has been over the last five centuries.
Asia must continue to make efforts to strengthen its institutions, contribute to the development of science and technology, assume more responsibilities in tackling global issues and articulate its own ideas.
(ANI)