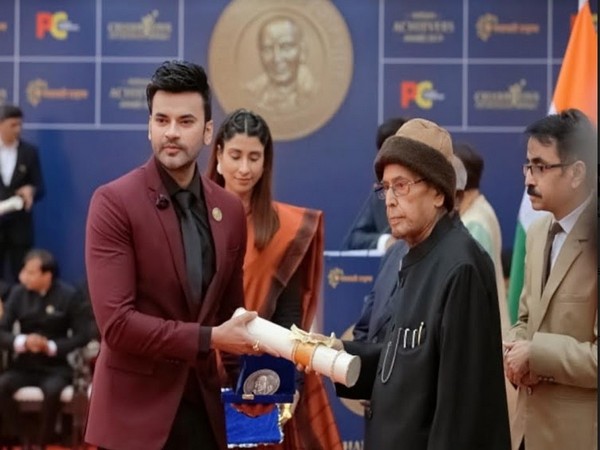 Bhopal (Madhya Pradesh) [India], Jan 24 (ANI/NewsVoir): Renowned cosmetologist and trichologist, Dr Abhinit Gupta, who is popularly known as Dr Bollywood, has been graced with the prestigious "Champions of Change" Award 2019 by Interactive Forum on Indian Economy (IFIE), a non-profit recognized by Govt of India, for his exemplary contribution to PM Narendra Modi's "Swachh Bharat Abhiyan".

The award was presented to Dr Abhinit Gupta by Former President, Dr Pranab Mukherjee, in a special ceremony conducted at his residence in New Delhi.
"Never in my life did I dream of achieving a feat like this. Receiving an award from a man of Dr. Pranab Mukherjee's stature feels amazing. This has taken my motivation to a whole new level," said Dr Abhinit Gupta, while speaking on his spectacular achievement.
"I never imagined that whatever little I could do to spread awareness about waste segregation and proper handling of waste would inspire so many people that I'd be called a Champion of Change. I thank IFIE for this great honour," added Dr Gupta.
With this achievement, Dr Abhinit Gupta's initiative for Swachh Bharat Abhiyaan has once again come into the limelight. He first made headlines when he towed garbage in Bhopal by using his DC Avanti sportscar worth several lakhs of rupees.
He attached a garbage trolley with ropes to his posh yellow car and collected waste from the local people and spread awareness about waste segregation. He has won several other awards for his unique campaign including the Madhya Pradesh Ratan Award and Madhya Pradesh Gaurav Award both of which he received from the Chief Minister of Madhya Pradesh.
Several other luminaries from different walks of life also received the "Champions of Change" Award, which included prominent names like Hemant Soren (CM, Jharkhand); Anurag Thakur (MoS Finance and Corporate Affairs); Manish Sisodia (Dy CM, Delhi); Acharya Balakrishnan; Shilpa Shetty Kundra and Shri Raj Kundra; Shri Suresh Oberoi; Shri Allu Arvind to name a few.
"Being counted among such illustrious personalities is humbling, to say the least. I sincerely hope I am able to live up to the expectations and make my city, Bhopal; my state, Madhya Pradesh, and my country, India, proud by continuously making positive contributions to our society," concluded Dr Abhinit Gupta.
The Jury for Champions of Change Award is headed by Justice K.G. Balakrishnan (Former CJI and Former Chairman NHRC). It also included Justice Gyan Sudha Misra (Former Judge, Supreme Court of India), Pahlaj Nihalani (Former Chairman, Central Board of film certification India), and Subhash Ghai (Veteran Indian Film Director).
The 2019 ceremony was the 2nd Champions of Change Award ceremony. In the first edition in 2018, Honourable Vice-President M. Venkaiah Naidu gave away the awards to winners that included an incumbent Chief Minister, Union Ministers, Members of Parliament, District Magistrates, Superintendents of Police, and various social workers.
Dr Abhinit Gupta featured as a winner of Champions of Change Award in the 2018 edition as well and received his award from Vice President, M Venkaiah Naidu.
This story is provided by NewsVoir. ANI will not be responsible in any way for the content of this article. (ANI/NewsVoir)