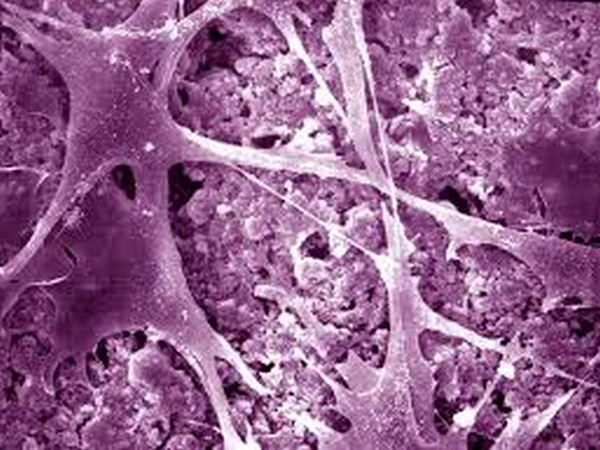 Washington D.C. [USA], Jan 18 (ANI): In a breakthrough invention, scientists have developed a polymer sheet that mimics muscles and has the ability to turn stem cells into bones. Stem cells are special in the sense that they can differentiate themselves into different types of cells, for instance, muscle cells, cartilage, or bone cells.

Just like the body, they are part of, stem cells sense what happens around them and react accordingly. For decades, researchers have been learning how to steer this differentiation process by changing the cells' environment. The knowledge acquired is already being used in tissue engineering, in other words, to generate substitute materials that restore or maintain damaged biological tissues. The study was published in the journal Proceedings of the National Academy of Sciences.
Now, researchers from the Helmholtz-Zentrum Geesthacht (HZG), the Berlin-Brandenburg Centre for Regenerative Therapies, the Freien Universitat Berlin and the Helmholtz Virtual Institute for Multifunctional Biomaterials in medicine have used a dynamic scaffold.
The researchers took a polymer sheet that acts like an artificial muscle. The sheet has an unusual property in that it is trained to reversibly morph when exposed to repeated temperature changes.
The researchers simply moulded a grid onto the underside of the sheet and programmed it to stretch as the temperature went from body temperature (37 °C) to 10 °C and to contract when re-heated.
They then seeded the sheet with stem cells, and carefully observed the changing shape of the gridded sheet and cells. With the help of this "artificial muscle", the scientists could use one physical signal - the temperature change - to simultaneously send a second mechanical signal to the stem cells. With these synchronised stimuli it is possible to encourage the stem cells to turn themselves into bone cells.
According to Professor Andreas Lendlein, author of the paper and head of the HZG's Institute of Biomaterial Science in Teltow, "Our polymer actuator sheet has a so-called shape-memory function. In our experiments, this allows it to act like a transducer, with which we can effectively instruct the cells to do as we wish."
"We found that the changes in temperature, combined with the repeated stretching motion of the film were enough to encourage the stem cells to differentiate into bone cells. The programmed polymer sheets could, for example, later be used to treat bones broken so severely that the body can't repair it by itself," Lendlein added.
Stem cells from a patient's bone marrow could be cultured on the sheet and adaptively wrap around the bone during an operation. The previously 'trained' cells could then directly strengthen the bones. (ANI)