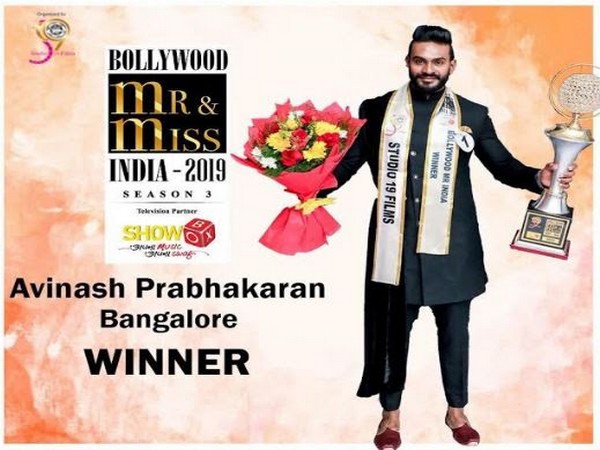 New Delhi [India], Jan 17 (ANI/NewsVoir): The last three seasons of Bollywood Mr and Miss India has produced and found some remarkable and gorgeous looking individuals. The fourth season is around the corner and new struggling artists will be given an opportunity to get this direct ticket to the industry and a chance at stardom.

Last year a seven-day event was organised at Delhi to find the complete package, the next face to sparkle on your screens. The seven-day event included grooming, styling and fashion choreography sessions for participants from across India.
The pageant was judged by some of the veterans in their fields, Gulshan Grover, Rajneesh Duggal, Sana Khan, Sapna Chaudhari and Yash Ahlawat was also was the organiser of the star-studded event. The contestants were judged on personality, screen presence, fitness and overall appeal.
The title of Bollywood Mr India was won by Avinash Prabhakaran from Bengaluru; a model, actor and Fitness Icon for youngsters. Winning this title is prestigious and will open the doors of Bollywood for this stunner along with several endorsements.
Avinash was guided and groomed for success by Raghav Khadam, the Show Director and mentor for victory with the support of Swapnil Pratap Nalwade, the event head, Reshma Ramesh Upase, the Event Manager, and Jayesh Patil, Associate Choreographer for the show. He will be the showstopper for the season 4 pageant soon. He will work as an example for the new talent and an inspiration to aspire to.
During the last season post the seven-day rigorous training that resulted in his victory, Avinash expressed his happiness and his desire to change the mindset of parents of aspiring models and actors.
"Today's generation is mature and ahead of their times. They understand what they want to be and how to achieve their goals. Parents should support them and break away from the traditional career options like Engineering or Medical. There is more to life than these options, the focus should be on being good human beings and giving back to society and the nation. Help India shine and not just focus on your personal aspirations," said Avinash.
Focusing on the growth of the nation, Avinash is not in favour of the youth moving abroad post-education, he feels that just benefits a family, not a nation as a whole. "It is important to give back to the nation that brought you up. Like one wouldn't give up their parents; don't give up on your country either," he added.
Fitness is of utmost importance to Avinash, bodybuilding is not necessary, it is a personal choice, "Everyone should focus on becoming fitter than they were, stay healthy and stay happy," said Avinash.
This story is provided by NewsVoir. ANI will not be responsible in any way for the content of this article. (ANI/NewsVoir)