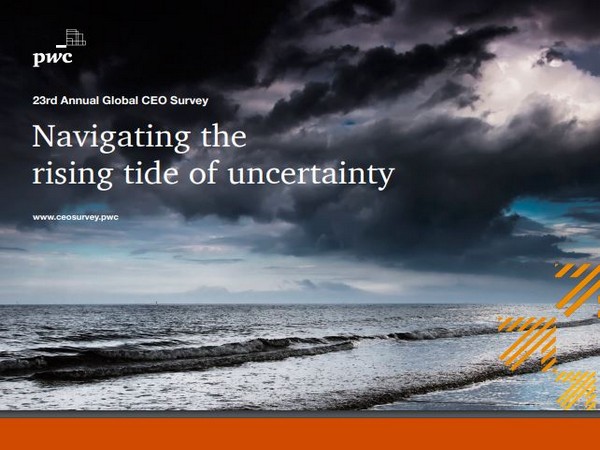 Davos [Switzerland], Jan 21 (ANI): As we enter a new decade, chief executive officers are showing record levels of pessimism in the global economy with 53 per cent predicting a decline in the rate of economic growth in 2020.

This is up from 29 per cent in 2019 and just 5 per cent in 2018 -- the highest level of pessimism since 2012. By contrast, the number of CEOs projecting a rise in the rate of economic growth dropped from 42 per cent in 2019 to only 22 per cent in 2020.
These are some of the key findings of consulting major PricewaterhouseCoopers' (PwC's) 23rd survey of almost 1,600 CEOs from 83 countries across the world, launched at the World Economic Forum Annual Meeting here.
CEO pessimism over global economic growth is particularly significant in North America, Western Europe and the Middle East with 63 per cent, 59 per cent and 57 per cent of CEOs from those regions predicting lower global growth in the year ahead.
In India, 52 per cent of them believe the global growth will decline while 17 per cent of them say it will stay the same and 27 per cent hope it will improve.
"Given the lingering uncertainty over trade tensions, geopolitical issues and the lack of agreement on how to deal with climate change, the drop in confidence in economic growth is not surprising -- even if the scale of the change in mood is," said Bob Moritz, Chairman of the PwC Network.
"These challenges facing the global economy are not new. However, the scale of them and the speed at which some of them are escalating is new, the key issue for leaders gathering in Davos is: how are we going to come together to tackle them?"
On a brighter note, said Moritz, while there is record pessimism among business leaders, there are still real opportunities out there.
"With an agile strategy, a sharp focus on the changing expectations of stakeholders, and the experience many have built up over the last ten years in a challenging environment, business leaders can weather an economic downturn and continue to thrive," he said.
CEOs are also not so positive about their own companies' prospects for the year ahead, with only 27 per cent of CEOs saying they are 'very confident' in their own organisation's growth over the next 12 months -- the lowest level we have seen since 2009 and down from 35 per cent last year.
While confidence levels are generally down across the world, there is a wide variation from country to country with China and India showing the highest levels of confidence among major economies at 45 per cent and 40 per cent respectively, the United States at 36 per cent, Canada at 27 per cent, Britain at 26 per cent, Germany at 20 per cent, France 18 per cent and Japan having the least optimistic CEOs with only 11 per cent of CEOs very confident of growing revenues in 2020.
(ANI)