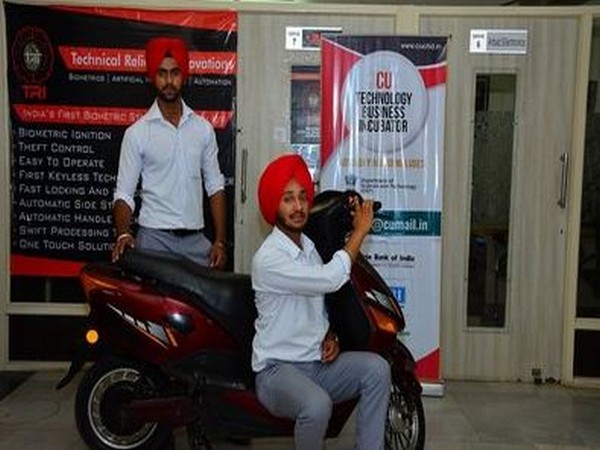 Chandigarh (Punjab) [India], Jan 14 (ANI/PRNewswire): Vehicle theft is arguably the fastest-growing type of crime in India. According to the data available from the police department of various states, motor vehicle theft cases are the least solved offences.

Final year Automobile Engineering students of Chandigarh University, Khushwinder Pal Singh and Vikramjit Singh have developed a solution to make the two-wheelers more secure, saving them from the possible threat of being stolen.
The two students have designed a biometric fingerprint two wheeler security kit which could be installed on any two-wheeler bike or scooter that will be directly connected to the ignition point of the vehicle.
The two-wheeler can only be unlocked with the owner swiping his or her finger on the biometric machine installed on the handle of the vehicle and until that the engine would be immobilized. The sensor would match the fingerprint with the already stored pattern and would allow the engine to be ignited only if the fingerprint matches.
"I used to read a lot of news about two-wheelers being stolen from public places and even from homes at night. While surfing on the internet, I found a biometric security technology that was being used in high-end cars in western countries but there was no security system for two-wheelers," said Khuswinder Pal Singh, who is studying in his third year.
It was then Khuswinder decided to conduct research and develop a security system for bikes and scooters as there are a large number of two-wheelers running on Indian roads than the four-wheelers.
Khuswinder discussed his idea with Vikramjit who agreed to join him to work on the project and finally, they submitted their idea at Chandigarh University Technology Business Incubator.
Both the students presented their project to a committee of experts which included Dr Satbir Sehgal, Director Engineering and Sanjeet Singh, Assistant Director, CU-TBI which passed the project and allocated funds to carry out the research.
It took eight months to bring out the first prototype which was ready to be installed on a vehicle and University research department donated a two-wheeler to the students for its testing.
"Initially the cost of the prototype came out to be Rs 22,000 which we thought is on a higher side but after further research, we have managed to bring down the cost of the security kit to Rs 4,000," said Vikramjit, who will become the first engineer in his family.
The students have filed a patent with Intellectual Property India and have already been approached by a number of two-wheeler automobile companies for the commercial production of the security kit.
Satnam Singh Sandhu, Chancellor, Chandigarh University congratulated Khuswinder and Vikramjit on their achievement and announced that the students will be given every possible support to set-up their venture at CU-TBI.
"The team have been allocated an office space at Technology Business Incubator and have been provided other possible support like arrangement of loans from government agencies to launch their start-up," he said.
This story is provided by PRNewswire. ANI will not be responsible in any way for the content of this article. (ANI/PRNewswire)