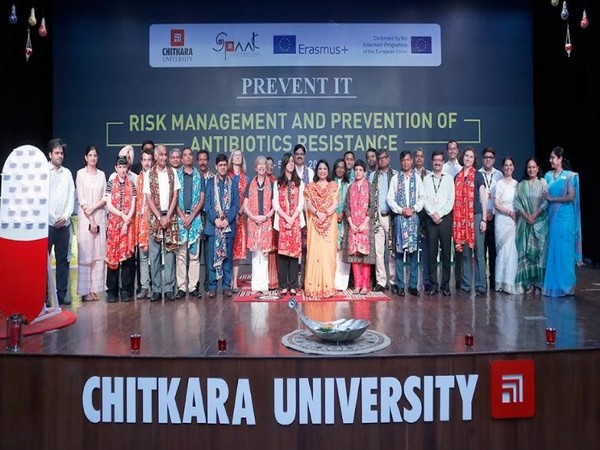 The three-year project Erasmus+ offers an innovative perspective in addressing antibiotic resistance. PREVENT IT is the fourth Erasmus+ project involving Chitkara University. This brings laurel to the university of being the most successful Erasmus+ recipient in South Asia.
Antibiotic resistance has emerged as a major global threat to human and animal health, food security and development.
It is expected to cause at least ten million deaths annually by 2050, more than cancer and diabetes combined causalities. PREVENT IT international consortium led by Chitkara University Punjab - comprises of five Indian universities, two Indian Non-Governmental Organizations and four European universities.
Chitkara University has been co-financed by the European Commission with a grant of eight crores to lead an international team of scientists united to promote education and awareness on Antibiotics Resistance.
The grant is provided under the framework of the prestigious Erasmus+ programme supporting education in Europe - as well as - awarding the most innovative ideas worldwide.
The project concept is inspired by the Indian National Action Plan to combat Antibiotics Resistance (ABR) having among its key goals the increase of societal awareness, empowering individuals from different social spheres.
"Doing a project for the first time is a great honour, but being a part of the prestigious Erasmus+ project for the fourth time speaks of the consistent innovation at our campus," said Dr Madhu Chitkara, Vice-Chancellor of Chitkara University, while speaking on the occasion.
"The main purpose of the multidisciplinary initiatives promoted by the project is to empower and amplify diverse voices representing healthcare providers, educators, researchers and community leaders. This will be achieved by sharing best practices in ABR education and awareness, combining traditional and innovative educational tools," added Chitkara.
This story is provided by NewsVoir. ANI will not be responsible in any way for the content of this article. (ANI/NewsVoir)