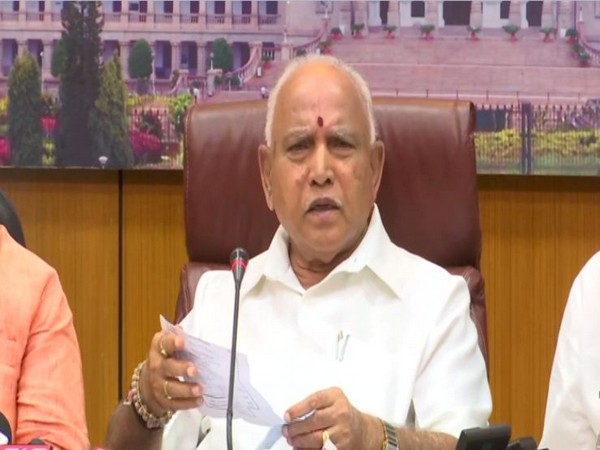 Davos (Switzerland), Jan 21 (ANI): Karnataka Chief Minister BS Yediyurappa has made a fervent appeal to investors at the World Economic Forum (WEF) at Davos to base their investments and industries in Karnataka keeping in view interest of farmers and to create more jobs.

Representatives of the 2000 Watt Company (Swiss-based company) involved in smart cities development projects and food processing clusters made presentations on their projects,
Chief Minister expressed his keen interest to boost the farmers' economy suggesting investors look at the economic development of farmers and rural masses along with their growth.
"Definitely we want new projects and investments, our purpose is to boost the state's economy and provide jobs for the youth to make them self sustainable", said Yediyurappa.
Representatives of the 2000 Watt Company said they possessed technology and were ready to invest in food clusters which can provide remunerative prices to the farm produce.
"We will provide all assistance and scientific farm techniques to grow healthy food and market them with added value to the produce," a scientist and academician Andreas Binkert disclosed expressing the company's keenness to invest in food clusters in Karnataka.
Earlier ReNew Power delegates expressed their interest in setting up solar power plants in barren lands in the state, particularly in North Karnataka region districts like Vjayapur, Kalaburagi, Koppal, and Raichur.
"We are planning to set up power storage batteries and gadgets to store the power produced in excess to the state's demand," Samanth Sinha CEO of the Re New Power said, suggesting the government should eliminate all bureaucratic and legal bottlenecks to improve the ease of doing business.
Most delegates from various companies that participated in today's discussions with the chief minister and other state delegates were to make the process of buying land from the farmers an easy business and this will happen only when some unwanted laws are either amended or removed.
Chief minister Yediyurappa in meeting with all the investor groups was particular on creating more jobs and in turn which could improve the rural economy.' " I am ready to go a mile extra to help the investors and industries which took care of our farmers and rural youth," he said.
Industries minister Jagadish Shettar, chief secretary T M Vijaybhasker, IT BT secretary V Ramanareddy, Industries PS Gourav Guptha, CM's secretary Selvakumar and Industries commissioner Gunjan Krishna were others who participated in the meetings. (ANI)