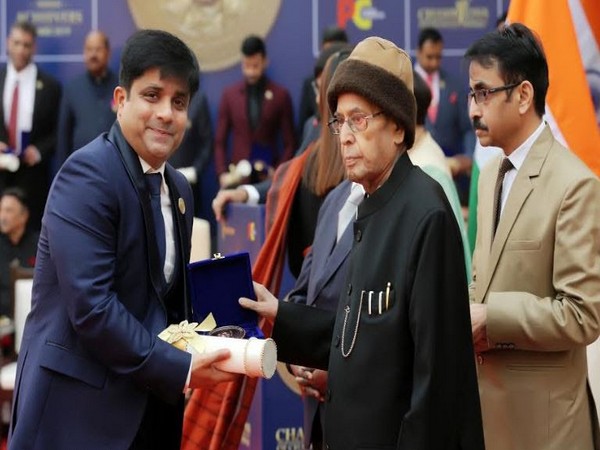 Chandigarh [India], Jan 25 (ANI/NewsVoir): Renowned sexologist Dr Beerinder Singh Yogi, has been graced with prestigious "Champions of Change" Award 2019 by Interactive Forum on Indian Economy (IFIE), a non-profit recognised by government of India, for his exemplary contribution in the field of Ayurveda healthcare services.

The award was presented to him by former President, Dr Pranab Mukherjee, in a special ceremony conducted at his residence in New Delhi.
"I sincerely believe that it is the duty of every doctor to keep citizens of the country healthy and continually work towards spreading healthcare awareness. I never really thought that performing my duty diligently can make me a Champion of Change!," said Dr Beerinder Singh Yogi.
"I feel proud to receive this prestigious award and am extremely honoured to receive it from Dr Pranab Mukherjee himself. This will be a lifetime memory for me. I would like to thank everyone for their support in my journey," he added.
Dr Beerinder Singh Yogi MD, manages the Dr Yogi's Clinic in Chandigarh, which was established by his father in 1944. His own two decades' journey has brought hope and happiness to thousands of families. He specialises in Ayurvedic treatment of people suffering from sexual diseases and ailments including infertility and other reproductive issues.
He has made a remarkable contribution towards redeveloping faith of the people towards Ayurveda through his path-breaking work in treating sexual ailments.
Dr Yogi has received many other recognitions and awards in the past as well. He was conferred with Bharat Ratna Dr APJ Abdul Kalam Excellence Award, and he was also honoured by Shripad Naik, Hon'ble Minister State for Ayush India, for excellence and valuable contribution in the field of Ayurveda.
The popularity of his clinic proves that Ayurveda offers the best treatment at affordable prices. He puts in his best efforts to educate people about the diseases, the right treatment procedure and the best diet plans.
Several other luminaries from different walks of life also received the "Champions of Change" Award, which included prominent names like Hemant Soren (CM, Jharkhand); Anurag Thakur (MoS Finance & Corporate Affairs); Manish Sisodia (Dy CM, Delhi); Acharya Balakrishnan; Shilpa Shetty Kundra and Raj Kundra; Shri Suresh Oberoi; Allu Arvind, to name a few.
The jury for Champions of Change Award is headed by Justice K.G. Balakrishnan (Former CJI and Former Chairman NHRC). It also included Justice Gyan Sudha Misra
(Former Judge, Supreme Court of India), Pahlaj Nihalani (Former Chairman, Central Board of film certification India), and Subhash Ghai (Veteran Indian Film Director).
The 2019 ceremony was the second Champions of the Change Award ceremony. In the first edition in 2018, Vice-President M. Venkaiah Naidu gave away the awards to winners that included an incumbent Chief Minister, Union Ministers, Members of Parliament, District Magistrates, Superintendents of Police, and various social workers.
This story is provided by NewsVoir. ANI will not be responsible in any way for the content of this article. (ANI/NewsVoir)