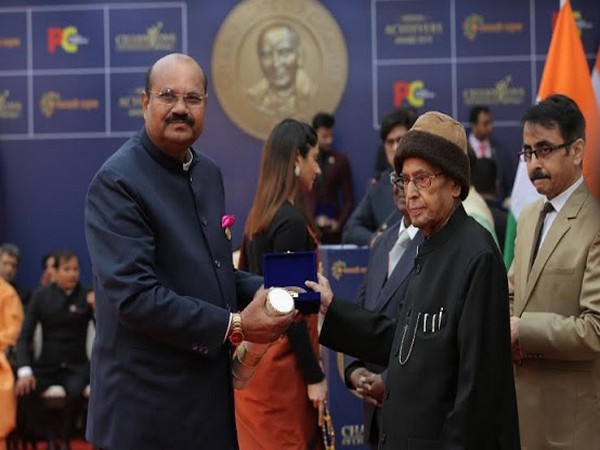 The award was presented to Dr PC Rayulu by Former President, Dr Pranab Mukherjee, in a special ceremony conducted at his residence in New Delhi.
"Hard work and good intentions always get rewarded. Receiving this award from the hands of a man of Dr Pranab Mukherjee's stature means a lot. Spurred by this award, I intend to expand my social initiatives and philanthropic work further and make a positive contribution to our society. I sincerely thank IFIE for this great honour," said Dr PC Rayulu.
This award marks a watershed moment in Rayulu's life and career and it comes close on the heels of the Government of India recognising his merit and bestowing "Pride of the Nation" accolade, presented by Rajnath Singh, Minister of Defence, Government of India.
Dr PC Rayulu is the Founder-Chairman of the PCR Group of companies with its headquarters in Tirupati, Andhra Pradesh. Hailing from a humble agricultural background and modest formal education, he is a self-made person and a successful entrepreneur. He is also the Chairman and Managing Trustee of Kasturba Gandhi Trust.
Kasturba Gandhi Trust (sponsored by Gandhi Smruti, Delhi), Tirupati was founded by Dr Rayulu in the year 2004. Prime Minister Narendra Modi called upon the nation to celebrate the 150th birth anniversary of Mahatma Gandhi in the most eminent manner.
In reverence to the message by the Prime Minister, Dr Rayulu, sponsored and organised a Guinness World Record and Unique World Record fetching largest drawing of the Father of the Nation, measuring an incredible 4416 square feet (70 feet X 65 feet), climaxing a fortnight long celebration of the memorable event on October 2, 2019.
This world/unique record is a historic honour to the town of Tirupati, the state of Andhra Pradesh and India as a country.
Rayulu started business on a very nebulous note in the then tiny Tirupati town in Andhra Pradesh in the early 1980s, handling a few truckloads of bagged cargo. From that modest dawn, he nurtured his business meticulously and galvanised it into a dazzling ISO certified expansive logistics group and evolved to lead it as a well-deserved CEO.
Today PCR Group is a conglomerate of eight companies handling a robust three million tonnes turnover of cement, fertilisers, food grains etc. across seven states from 25 branch locations operating out of five lakh square feet warehouse space and catering to over a dozen major corporate houses in private and public sectors.
The catalogue of services offered covers the entire gamut of field logistics operations - C & F, container and wagon rake handling, warehousing and inventory management, bulk and bagged cargo movement from production units as well as marketing buffer centres, secondary transportation to retail points and other allied services.
The group has embraced change and adopted modern integrated software application technology and tools to span customer supply chains to the last mile most diligently.
That most of the principals/customers of the group have continued to seek the group's services is ample testimony to the quality and customised services it offers. Rayulu duly acknowledges the magnanimous support and encouragement he has received from late K K Birla and late Aditya Birla and their families in the enduring progress of his enterprise
In recognition of his exemplary administrative and organisational skills, he has been nominated for several central government assignments. He served as Chairman, Food Processing Industries, South Zone for two terms.
He has been on the committees of Food Corporation of India. Rural Development, Steel, Coal, Railways and Ministry of External Affairs (ICCR). He has also been the Chairman of Balaji Urban Coop Bank in Tirupati for five years and held the position of President at the Tirupati Chamber of Commerce for 10 years.
Several other luminaries from different walks of life also received the "Champions of Change" Award, which included prominent names like Hemant Soren (CM, Jharkhand); Anurag Thakur (MoS Finance & Corporate Affairs); Manish Sisodia (Dy CM, Delhi); Acharya Balakrishnan; Shilpa Shetty Kundra and Raj Kundra; Shri Suresh Oberoi; Allu Arvind, to name a few.
The Jury for Champions of Change Award was headed by Justice KG Balakrishnan (Former CJI and Former Chairman NHRC). It also included Justice Gyan Sudha Misra (Former Judge, Supreme Court of India), Pahlaj Nihalani (Former Chairman, Central Board of film certification India), and Subhash Ghai (Veteran Indian Film Director).
The 2019 ceremony was the second Champions of Change Award commemoration. In the first edition in 2018 winners included an incumbent Chief Minister, Union Ministers, Members of Parliament, District Magistrates, Superintendents of Police, and various social workers.
Dr PC Rayulu featured as a winner of Champions of Change Award in the 2018 edition as well and received his award from Hon'ble Vice President, Shri M. Venkaiah Naidu.
This story is provided by NewsVoir. ANI will not be responsible in any way for the content of this article. (ANI/NewsVoir)