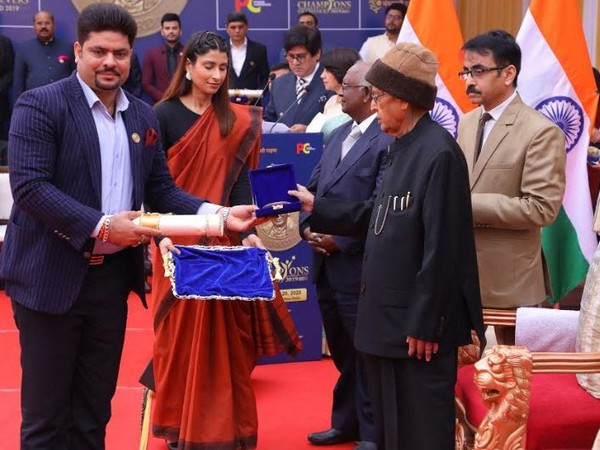 New Delhi [India], Jan 27 (ANI/NewsVoir): The founder of Asclepius Wellness Pvt. Ltd., Sanjeev Kumar, an ex-army officer, has been graced with prestigious "Champions of Change" Award 2019 by Interactive Forum on Indian Economy (IFIE), a non-profit recognized by government of India, for his exemplary work in the field of healthcare and spreading awareness about Ayurveda.

The award was presented to Sanjeev Kumar by former President, Dr Pranab Mukherjee, in a special ceremony conducted at his residence in New Delhi.
"Having spent years in the service of my country, I feel honoured to receive the Champions of Change award from someone who has held the highest office in our country. Dr Pranab Mukherjee, the former President of India, is the pride of our nation and I'm humbled to receive his blessings," said Sanjeev Kumar.
"This achievement gives me new motivation to strive further and spread the message of Ayurveda far and wide!" he added.
Born and brought up in the city of Modinagar under Ghaziabad district, Sanjeev Kumar completed his schooling and higher education from Ghaziabad itself. He started his career by serving the country through the Indian Army, during his tenure in the Army, he had to be stationed at the border front several times.
After service in the army for around 16 years, he took retirement to pursue other means of serving his country and his people.
He spent three years in the direct selling industry and grew his team to millions of people. Seeing his dedication and hard work, everyone followed him as a mentor. He was amazed to see how direct marketing can help make people financially independent.
Kumar also realised that unemployment and diseases are the primary cause of worry for most Indian many citizens due to which, they have to live an extremely difficult life.
Kumar, having seen the real power of Ayurveda in his own family, decided to launch his idea in the form of a healthcare company named, "Asclepius Wellness Private Limited", a herbal Ayurvedic proprietary products manufacturing and selling company.
Today, millions of people from all over the country are using the superior Ayurvedic products of his company to sustain a healthy life. They also make good earnings for themselves by making people aware of the benefits of Ayurveda and recommending these products to others.
Several other luminaries from different walks of life also received the "Champions of Change" Award, which included prominent names like Hemant Soren (CM, Jharkhand); Anurag Thakur (MoS Finance & Corporate Affairs); Manish Sisodia (Dy CM, Delhi); Swami Avdheshanand Giri Maharaj (Acharya Mahamandleshwar Juna Akhara); Geeta Koda, Member of Parliament, Acharya Balakrishnan; Shilpa Shetty Kundra and Raj Kundra; Suresh Oberoi; Allu Arvind, to name a few.
The jury for Champions of Change Award is headed by Justice KG Balakrishnan (Former CJI and Former Chairman NHRC). It also included Justice Gyan Sudha Misra
(Former Judge, Supreme Court of India), Pahlaj Nihalani (Former Chairman, Central Board of film certification India), and Subhash Ghai (Veteran Indian Film Director).
The 2019 ceremony was the second Champions of Change Award ceremony. In the first edition in 2018, Vice-President M Venkaiah Naidu gave away the awards to winners that included an incumbent Chief Minister, Union Ministers, Members of Parliament, District Magistrates, Superintendents of Police, and various social workers.
This story is provided by NewsVoir. ANI will not be responsible in any way for the content of this article. (ANI/NewsVoir)