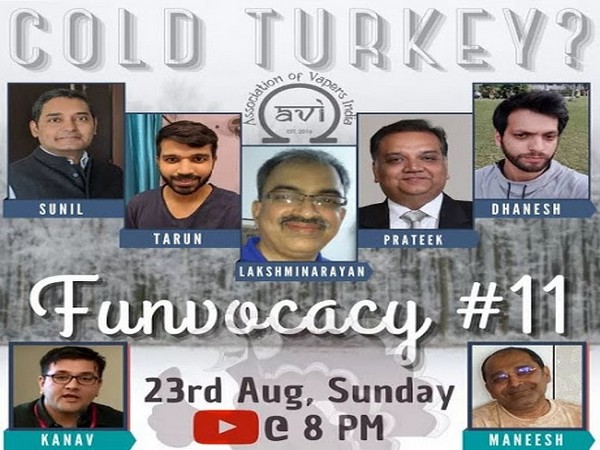 New Delhi [India] September 3 (ANI/NewsVoir): Quitting smoking on one's own is hard and takes many attempts to succeed, which can be overcome if smokers have access to diverse cessation options, former smokers said during a webinar organized recently to assess the effectiveness of cold turkey in helping smokers quit.

The participants from across age groups and backgrounds shared personal experiences regarding quitting smoking and recalled the hardships they faced while going cold turkey as they suffered withdrawal symptoms, mood swings, and most importantly, it took them a long time to give up.
They agreed that smoking can't be quit gradually and also said the lack of government support for tobacco harm reduction alternatives will make the quit journey more difficult for current smokers.
The webinar was hosted under the aegis of Council for Harm Reduced Alternatives (CHRA) which advocates for pragmatic solutions to combat the tobacco epidemic. The panel comprised speakers from Kolkata, New Delhi, Hyderabad, Indore, and Pune.
"Going cold turkey is the most difficult way to quit smoking as it requires a lot of effort. It takes many attempts to succeed. Smokers also need psychological support when trying to give up. It is important to spread awareness about other cessation methods so that they can supplement their efforts," said Tarun Kumar, a panelist.
Another participant from Kolkata, Sunil Shaw said he decided to quit smoking after his daughter was born. "Most smokers who go cold turkey are driven by emotional reasons, though health is also a primary factor. In this process, they have to suffer a lot of problems. In a country like India where tobacco consumption is so high that it kills over ten lakh people every year, we can't say that cold turkey is the best way to make India a tobacco-free country. I think the authorities should think of promoting scientifically proven methods that can help people in giving up smoking," shared Sunil.
S Lakshminarayan, who participated from Hyderabad, said harm reduction advocacy is extremely important in a country like India. "Harm reduction tools can help smokers in giving up without severe withdrawal symptoms or other health issues such as anger and anxiety. It is important to make smokers aware of various methods available which can help them in giving up smoking," said Lakshminarayan.
Co-hosting the session, tobacco cessation activist Maneesh Kasera said cold turkey is not only one of the hardest methods adopted by smokers but it is also the least successful one; hence there is a need to expand cessation options. "Statistics show that only 5 per cent of smokers are able to quit with the help of their will power. In the remaining 95 per cent cases, willpower needs to be supplemented with counseling or harm reduction methodologies to achieve the target of making India tobacco-free," he added.
In this context, Delhi-based host Kanav Kumar voiced dissent on the ban of e-cigarettes. "Vaping is widely recognized as one of the most successful alternatives to help smokers quit and many countries including the UK, US, Canada, etc are adopting it as a harm reduction method. But India has taken a regressive approach and that left smokers in India with fewer cessation options," added Kanav.
Support through nicotine gums and patches, enrolling in a cessation programme, reading self-help books and partnering with a 'quit buddy' where the other techniques highlighted in the webinar.
This story is provided by NewsVoir. ANI will not be responsible in any way for the content of this article. (ANI/NewsVoir)