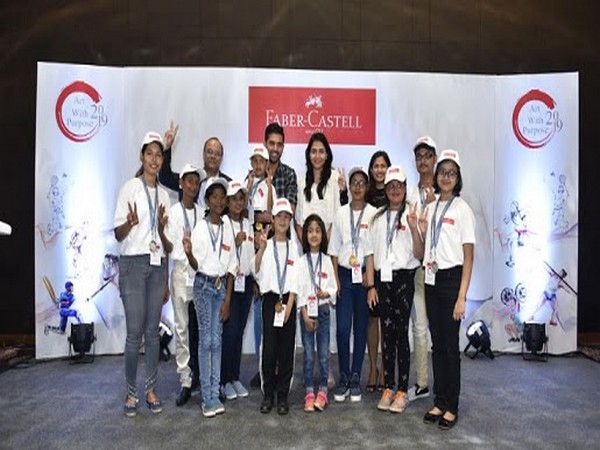 Goa [India], Jan 18 (ANI/NewsVoir): The 2019 edition of the six-month-long annual offline campaign run by Faber-Castell India, "Art with Purpose" concluded today with a remarkable growth of more than 15 per cent in numbers of school that participated this year.

With the company's vision in line to "unleash the creative potential" of young students, Faber-Castell India launched the initiative in 2018 with 1500 schools as partners to host this competition.
After a successful run in its first edition, Faber-Castell launched its second edition in 2019 with renewed enthusiasm of hosting it close to 2000 schools wherein 1.5 million students participated.
"The core of the program remains the same every year i.e. integrating art with subjects relevant to the child. The excitement and the theme is what makes Art with Purpose different every year. We try to bring in a theme which will have a significant impact on the development of the child, this year it is sports - a very integral part of skill development," said Nisha Sara Jose, Marketing Director at Faber-Castell India, who was present at closing celebrations.
"We are happy that more and more schools have shown interest and enthusiasm in participating. We want to make 'Art with Purpose' one of the most aspirational program which is recognized in the education sector as a National Level Art contest that adds value to their overall curriculum and helps build better individuals for tomorrow," added Jose.
"This year we have grown more than 15 per cent in terms of the number of schools that participated in comparison to last year, the galloping rise in participation has been overwhelming," said Partho Chakrabarti, Managing Director, Faber-Castell India.
"I believe that it has to do with the themes we use from cultural diversity to sports; we try to encourage children to be as expressive as they can be and I am glad that responses on this year's entries have been beyond cricket. We aim to grow significantly in the coming editions," added Chakrabarti.
Gracing the event were Prashanti Singh, Indian National Basketball player and Deepak Chahar, Indian Cricketer, who were intrigued to learn about this campaign run by Faber-Castell India and the creativity that they have been bringing out in students.
"Thrilled to see some of the paintings of the winners and how young minds have been inspired by sports," remarked Prashanti Singh.
"Creativity enticed by the students in these artworks were prolific and this initiative will help students to open up both creative and physical aspects of their personalities," said Deepak Chahar.
The 12 winners were in Goa for a two day off-site where they did some sightseeing and spent some time at the Faber-Castell factory to witness how products are made, followed by a day filled with celebrations with Prashanti Singh and Deepak Chahar where the first prize winners from all four groups were awarded a scholarship of Rs 75,000 each and second and third prize winners from all four groups have been awarded with medals and Faber-Castell goodies.
This story is provided by NewsVoir. ANI will not be responsible in any way for the content of this article. (ANI/NewsVoir)