Far away planet where it rains iron spotted by scientists 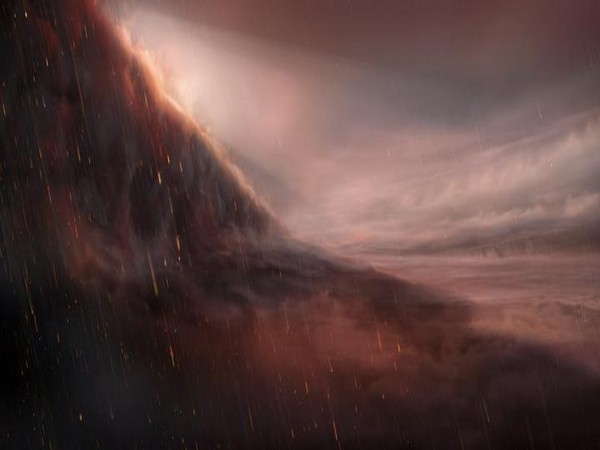 Santiago [Chile], Mar 12 (ANI): An exoplanet, 390 light years away towards the constellation Pisces, has days when its surface temperatures exceed 2,400 degree Celsius, which is sufficiently hot to evaporate metals. Its nights with strong winds then cool down the iron vapour so that it condenses into drops of iron.

This is the first result with the high-resolution spectrograph ESPRESSO, an instrument co-directed by the Instituto de Astrofisica de Canarias (IAC) and installed on the Very Large Telescope (VLT) of the European Southern Observatory (ESO), in Chile.
With ESPRESSO (Echelle Spectrograph for Rocky Exoplanets and Stable Spectroscopic Observations), astrophysicists have detected the trace of iron vapour just at the division between the daytime and the night time sector of the planet.
It is the first time that chemical variations have been detected in a giant ultra-hot planet.
"However, surprisingly we do not see this iron vapour at dawn. The only explanation possible for this phenomenon is that it rains iron on the dark side of this exoplanet with extreme conditions," says David Ehrenreich, a researcher at the University of Geneva and the first author of the article.
According to Maria Rosa Zapatero Osorio, a researcher at the del Centre for Astrobiology of the Spanish National Research Council and coordinator of the ESPRESSO science team, the observations show a huge quantity of iron in the daytime atmosphere of the giant planet WASP-76b.
"A part of this iron is transported to the dark side of the planet due to its rotation and the atmospheric winds. There in the cooler environment of the dark side of the planet, the iron condenses and precipitates," Maria Rosa Zapatero Osorio said.
"Just like the Moon around the Earth, this planet always keeps the same face towards its star as it rotates around it, which causes this extreme difference in temperature between day and night on the planet," explains Jonay I. Gonzalezz Hernandez, Ramon y Cajal researcher at IAC and a member of the science team of ESPRESSO.
WASP-76b receives thousands of times more radiation from its central star than arrives at the Earth from the Sun. Its daytime face is so hot that the molecules split into atoms, and metals such as iron evaporate into the atmosphere. The difference of more than a thousand degrees between night and day produce strong winds which take the iron vapour into the coolest part of the exoplanet.
"Ultrahot giant planets are the best laboratories we have for studying extreme climates on exoplanets. If we observe an exoplanet during its transit across the disc of its star we can study the part of its atmosphere through which the light from the star passes. With ESPRESSO it has been possible to detect chemical variations using analysis of the small part of the atmosphere we can observe", adds Nuria Casasayas Barris, a researcher at the IAC and PhD student of the University of La Laguna (ULL). (ANI)