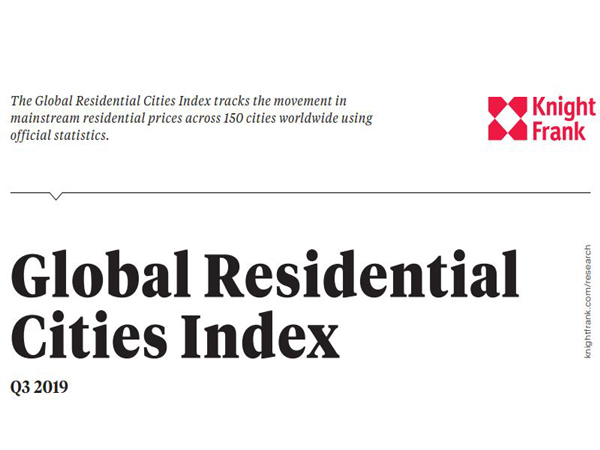 Mumbai (Maharashtra) [India], Jan 21 (ANI): Knight Frank has featured Hyderabad as the only Indian city in top 20 among 150 global cities tracked, in terms of appreciation in residential real estate prices, standing at the 14th spot with a healthy 9 per cent year-on-year rise in home prices.

In its latest report titled 'Global Residential Cities Index Q3 2019' released on Tuesday, it said price growth has been strong in the Hyderabad residential market as a shortfall in launches diverted homebuyers towards the ready unsold units giving developers a bargaining edge.
Among other Indian cities which have seen an appreciation in home prices, New Delhi stood at the 73rd rank globally with a home price appreciation of 3.2 per cent y-o-y, Bengaluru at the 94th rank with a 2 per cent appreciation and Ahmedabad at the 108th rank with a 1.1 per cent rise.
Among those which have seen degrowth in home prices, Kolkata was ranked at the 130th spot with a decline of 2 per cent, Mumbai at the 135th rank with a degrowth of 3 per cent and Chennai at the 136th rank with a fall of 3 per cent.
Pune was the lowest-ranked Indian city standing at the 138th spot, registering a 3.5 per cent decline in home prices.
Shishir Baijal, Chairman and Managing Director of Knight Frank India, said the growth in residential prices in most of the top eight cities of India has been below retail inflation growth and the gap has progressively increased since the first half of 2016.
"Hyderabad has been the only market to buck the trend and record residential price growth over the retail inflation level. This end-user friendly movement in prices across cities is a step in the right direction and more in-line with the contemporary home buyer's needs," he said in a statement.
The Global Residential Cities Index tracks the movement in mainstream residential prices across 150 cities worldwide using official statistics. Budapest in Hungary leads the Global Residential Cities Index Q3 2019 with the highest annual growth rate of 24 per cent followed by Xi'an in China and Wuhan in China at 15.9 per cent and 14.9 per cent respectively.
Prices across the 150 cities worldwide increased at 3.2 per cent on average, the weakest annual rate registered since the second quarter of 2015. Yet, more than 78 per cent of the 150 cities tracked by the index registered either flat or rising prices over the 12-month period.
(ANI)