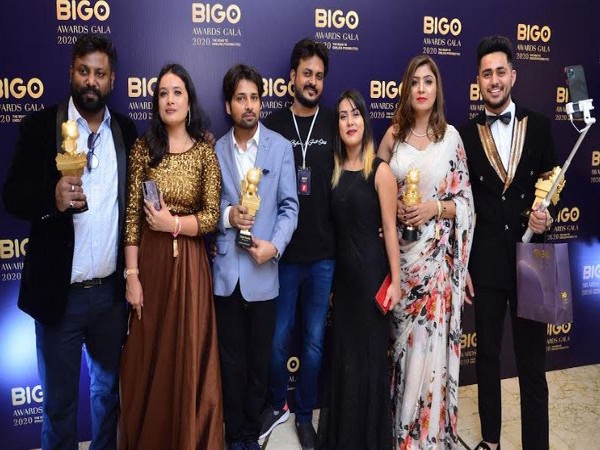 Howie Lau, Chief Industry Development Officer at the Infocomm Media Development Authority (IMDA) was the Guest-of-Honour.
It was not only a starry affair featuring a red-carpet, attended by some of the biggest names in the broadcast on Bigo Live who flew in from all over the globe but also an evening that celebrated talent and felicitated live-streaming hosts who have performed exceptionally well on Bigo Live over the past year.
The event felicitated over 70 award winners in the categories of Top Regional Broadcaster, Top Regional Family, Top Global Broadcaster and Top Global Family. The award ceremony not only recognized the top individuals but also the top "group" or "family" in Bigo Live, fuelling the understanding that teamwork is also celebrated on the platform.
Notable Indian content creators were also awarded in the "Top Regional Family Category". Winners included Sameer, an IT Engineer with over three million fans, Abhinav from 'Respect Girls Family', and Kapil Soni, who has crowned the undisputed Champion in the same category.
Dimple D'souza, a popular broadcaster, Youtuber, fashion stylist and entertainer, with over 4 million followers, shared the stage with Nishu Tomar. Nikita Tiwari, an Indian TV actress currently working in Color's 'Ram Siya ke Luv Kush'. They were both awarded "Top Regional Broadcaster". Nikita also performed a lively Indian dance to entertain an audience of a thousand.
Since, BIGO's arrival to Singapore in 2014, the app quickly rose to dominate video live streaming around the world. Dedicated to creating a better-connected world for everyone, BIGO provides a portfolio of video broadcast and VoIP related products and services powered by advanced Artificial Intelligence (AI) technology, allowing anyone to broadcast instantly from their mobile phone.
BIGO presently has seven Research and Development centres, in Singapore, U.S.A., Middle East, India, and China, and over 20 offices around the globe.
Bigo Live is rising fast in popularity in Singapore and around the world. It now services over 22 million users on a monthly basis worldwide since its launch. Also, it has been noticed that live-streaming is gaining more popularity, as millennials feel the need to be constantly connected, and such platforms allow them to stay connected, meet different people and share new experiences.
"With the company group now having over 330 million Monthly Active Users (MAUs) in over 150 countries worldwide, it is highly paramount to honour and celebrate the live streaming hosts who have performed exceptionally well on our platform over the past year. Our community is the very heart and soul of BIGO, and through this, we want to recognize and appreciate their dedication and commitment to their art," said Mike Ong, Vice President, Government Relations of BIGO Technology.
The popularity of video streaming apps is at an all-time high in India, with mobile live streaming giving life to a new online culture and new modes of real-time selling, resulting in spawning a raft of new on-air personalities across the region.
The event showcased popular live-streaming broadcasters, including singers, dancers, and talented hosts among others from all around the world in celebration of their talent. The program featured a multitude of various performances, awards, and other entertainment acts.
Broadcasters and talent from regions such as the Americas, Europe, Middle East, and Asia sat through a night of live entertainment by fellow performers followed by six rounds of awards including Top Regional Broadcaster, Top Regional Family, Top Global Broadcaster and Top Global family.
The BIGO Awards Gala 2020 hopes to share the growing significance of live streaming while celebrating the winners and setting the scene for this upcoming industry. With BIGO's devotion to continuously innovate its AI capabilities, users are prompted to stay tuned to witness what comes next in the online creative environment.
This story is provided by NewsVoir. ANI will not be responsible in any way for the content of this article. (ANI/NewsVoir)