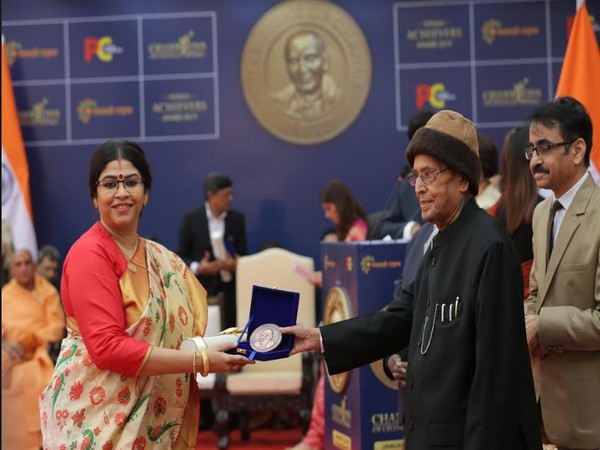 The award was presented to Dr Sohini Sastri by former President, Dr Pranab Mukherjee, in a special ceremony conducted at his residence in New Delhi.
"Receiving an award from Dr Pranab Mukherjee is like a dream come true for me. He has been a torchbearer originating from West Bengal and I'm proud to have had his blessings. Today has to be one of the most memorable days of my life. I feel humbled to know that my selfless work for society makes me a Champion of Change. I thank IFIE for felicitating me," said Dr Sohini Sastri.
Dr Sohini Sastri is an internationally acclaimed astrologer by profession. She has won various national and international awards for her professional and social initiatives on society.
She received the prestigious "Pride of the Nation" award from the Defence Minister of India, Rajnath Singh and the "Brilliance Award" by the Governor of Uttarakhand, Baby Rani Maurya.
Sohini Sastri has been known to help poor street children and save them from a life of distress and child labour since her early teenage days. Currently, she regularly participates in programs of several NGOs of international repute like SMILE, Ramakrishna Mission, ISKCON, HelpAge India and many other local NGOs for the upliftment of socially and economically underprivileged children and women.
Several other luminaries from different walks of life also received the "Champions of Change" Award, which included prominent names like Hemant Soren (CM, Jharkhand); Anurag Thakur (MoS Finance and Corporate Affairs); Manish Sisodia (Dy CM, Delhi); Acharya Balakrishnan; Shilpa Shetty Kundra and Raj Kundra; Suresh Oberoi; Allu Arvind, to name a few.
The jury for Champions of Change Award is headed by Justice KG Balakrishnan (former CJI and former Chairman NHRC). It also included Justice Gyan Sudha Misra (Former Judge, Supreme Court of India), Pahlaj Nihalani (Former Chairman, Central Board of film certification India), and Subhash Ghai (Veteran Indian Film Director).
The 2019 ceremony was the second Champions of Change Award ceremony. In the first edition in 2018, Vice-President M. Venkaiah Naidu gave away the awards to winners that included an incumbent Chief Minister, Union Ministers, Members of Parliament, District Magistrates, Superintendents of Police, and various social workers.
This story is provided by NewsVoir. ANI will not be responsible in any way for the content of this article. (ANI/NewsVoir)