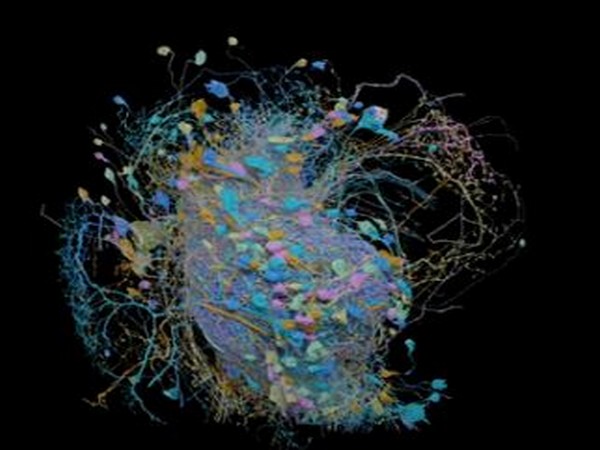 Washington D.C. [USA], Jan 26 (ANI): In a fascinating and path-breaking development, a group of scientists has produced the most detailed, high-resolution 3D map of brain connectivity for any animal to date.

The model -- which is published by a collaboration between scientists from Google and FlyEM team from Janelia Research Campus, Virginia -- visually represents nearly 20 million synapses linking 25,000 neurons in a fruit fly's brain.
According to The Verge, the map can be considered a landmark in connectomics, a spere of technology that utilizes advanced imaging techniques to trace the brain's physical pathways.
The fruit fly possesses a brain roughly the size of a poppy seed, and the scientists decided to map one-third of it. Till now only the C. Elegans roundworm has got it's entire nervous mapped in this manner.
A milestone without a doubt, this seemingly tiny task turned out to be a laborious one, that demanded the use of peak tier technologies along with countless hours of human effort.
The fruit fly's brain was first sliced into sections that were a mere 20 microns in thickness, which is roughly a third of a human hair's width.
Fruit flies are an old-time favorite of connectomics experts as their brains are simple in structure but the insect displays behaviors that are rather complex, such as courtship dances.
The microscopic slices hence obtained were then bombarded with streams of electrons coming out of a scanning electron microscope, reported The Verge.
The scientists subsequently ended up with data containing 50 trillion 3D pixels, also called voxels, that were put through an algorithm tasked with tracing each cell's pathway.
Despite all the computational brute force that lies at Google's disposal, it took the Janelia team two years and hundreds of thousands of hours for "proofreading" and verifying the routes of 20 million chemical synapses by using VR headsets and customized 3D editing computer applications.
The entire fruit fly brain contains about 100,000 neurons, however, this project only mapped only a specific segment, called the hemibrain. The human brain is vastly more complex as it contains nearly 86 billion neurons. Attributing to this, it seems that the days are quite far when we would be capable enough to create a full map of our own brain pathways.
Some skeptics argue that connectomics in itself doesn't answer any questions directly, at least as of now, and that such a monumental exercise is a waste of the resources that could be allocated somewhere else.
While talking to The Verge, Mark Humphries, a neuroscientist at the University of Nottingham said that "the reconstruction is no doubt a technical marvel," but "it will not in itself answer pressing scientific questions, but it might throw up some interesting mysteries."
On the other hand, some experts are of the opinion that connectomics will bear its fruits in the years that lie ahead.

"I believe people were impatient about what [connectomes] would provide," said Joshua Vogelstein, a biomedical engineer and co-founder of the Open Connectome Project.
"The amount of time between a good technology being seeded, and doing actual science using that technology is often approximately 15 years. Now it's 15 years later and we can start doing science," Vogelstein further added.
The entire data regarding the findings along with a pre-print paper have been made public and uploaded online. The complete research would be published in the coming weeks. (ANI)