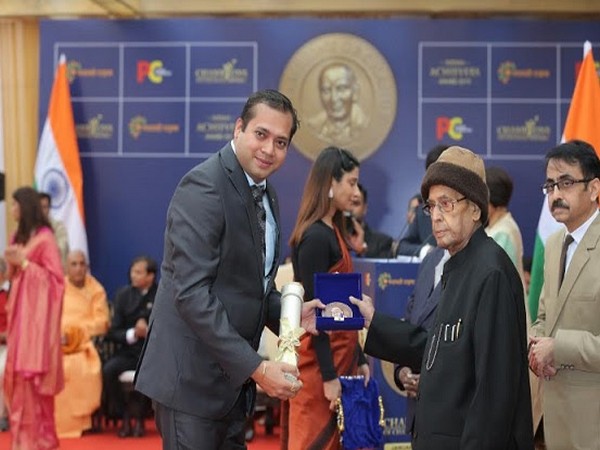 The award was presented to Ajay Harinath Singh by former President, Dr Pranab Mukherjee, in a special ceremony conducted at his residence in New Delhi.
"It feels surreal to receive an award from Dr Pranab Mukherjee. It's definitely the most remarkable day of my life. I never thought that whatever little I could do for the less fortunate people in our society would earn me the tag of being a Champion of Change. I thank my well-wishers for their blessings and the IFIE for this great honour", said Ajay Harinath Singh.
Ajay Harinath Singh has founded and heads the Darwin Platform Group of Companies (DPGC), a conglomerate dealing in banking, realty, hospitality, mining, pharmaceuticals, film production, etc.
Singh & Sons are the parent company of Darwin Platform Group of Companies having a presence in nine countries globally with a net worth of Rs 41000 crore and are completely debt-free. Over 23,000 people are employed with the group companies worldwide. Always striving for more, he firmly believes in giving back to society.
Among his several philanthropic and social initiatives, the most prominent is Ajay Harinath Singh Foundation (AHSF) food charity, which provides food to the homeless and needy.
Ajay Harinath Singh has also built low-cost hospitals in Latur (Maharashtra) and Bhuj (Gujarat) for low-income families, with an aim to provide quality and affordable healthcare services.
Several other luminaries from different walks of life also received the "Champions of Change" Award, which included prominent names like Hemant Soren (CM, Jharkhand); Anurag Thakur (MoS Finance & Corporate Affairs); Manish Sisodia (Dy CM, Delhi); Acharya Balakrishnan; Shilpa Shetty Kundra and Raj Kundra; Suresh Oberoi; Allu Arvind, to name a few.
The jury for the Champions of Change Award is headed by Justice KG Balakrishnan (Former CJI and Former Chairman NHRC). It also included Justice Gyan Sudha Misra (Former Judge, Supreme Court of India), Pahlaj Nihalani (Former Chairman, Central Board of film certification India), and Subhash Ghai (Veteran Indian Film Director).
The 2019 ceremony was the second Champions of Change Award ceremony. In the first edition in 2018, Vice-President M Venkaiah Naidu gave away the awards to winners that included an incumbent Chief Minister, Union Ministers, Members of Parliament, District Magistrates, Superintendents of Police, and various social workers.
This story is provided by NewsVoir. ANI will not be responsible in any way for the content of this article. (ANI/NewsVoir)