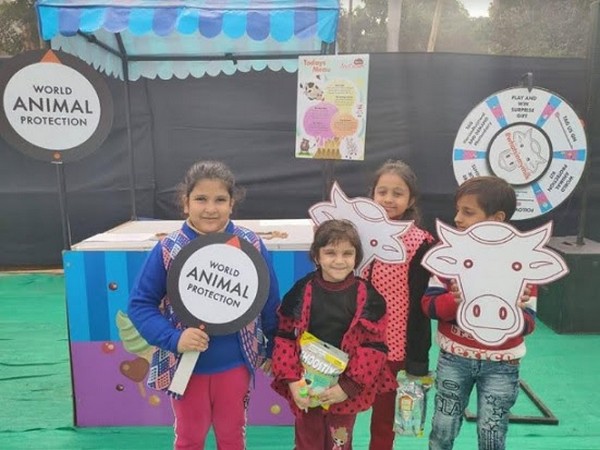 New Delhi [India], Jan 13 (ANI/NewsVoir): An ice cream cart got the attention of people, but when they read what was on the menu, they were shocked and disturbed.

Over 1600 people in Delhi have come forward in support of the Better Dairy campaign, launched by international animal welfare organisation - World Animal Protection.
The ice cream cart started its journey in October 2019, and travelled to different parts of the city and informed people about the cruelty faced by millions of dairy animals everyday and how they can change it.
A key takeaway for people coming to the ice cream cart was to ask their respective dairy companies on the steps it is taking to improve the welfare of its animals.
India is home to over 299 million cattle, 90 million of whom live in urban and peri-urban areas. Everyday, an estimated 50 million dairy animals suffer the worst cruelty as they live in unacceptable conditions in these urban and peri-urban dairies.
They are often confined to large dark rooms without windows or natural light, are permanently tethered with barely any room to move, they lie in their own faeces all day without access to clean water, good quality feed or any healthcare.
The journey of the ice cream cart started from Dilli Haat and travelled to Malls and India's biggest pet festival, Petfed where hundreds of people gathered to understand the problem and got involved in ending the plight of these animals.
"With the Better Dairy campaign we wanted to raise two pertinent questions - What is in your milk and whether dairy companies are taking care of basic welfare of dairy animals?" said Gajender K Sharma, Country Director, World Animal Protection India.
"Millions of animals are enduring unimaginable cruelty in these urban and peri-urban dairies that are in our cities. We urge the government to shift these dairies outside the city limits, so that these animals get more space, better feed, water, and a better life," added Sharma.
World Animal Protection is also running an online petition asking for people to support the demand of shifting the urban and peri-urban dairies outside city limits.
Over 70,000 people have signed the petition and given their support.
"My wish is to give clean drinking water to dairy animals. We shall increase pastures and should have open spaces for cow grazing. We must take steps to ensure that dairy animals get food, water, and shelter," said Ashveen Kaur, a supporter of the campaign.
The international animal charity is also working closely with dairy companies to ensure that milk is not sourced from urban and peri-urban dairies.
Due to their efforts and the commitment by the companies, better welfare is now possible for over 526,000 animals.
"Till now six dairy companies have signed a formal commitment that they will not source milk from urban and peri-urban dairies. But more needs to be done. Some major companies are yet to give that commitment and we are working with them to ensure that they too commit to high welfare dairy products," further added Sharma.
The importance of animal welfare across supply chains is also evident internationally as seen in the global Business Benchmark for Animal Welfare (BBFAW), which covers more than 100 of the largest food companies, including Fonterra, Nestle and Groupe Danone.
Locally, recent visits to Indian rural farms implementing the minimum dairy welfare requirements have realized a range of important benefits. Not only are their cows in good condition, loose housed, with continual access to water, comfortable bedding, and shade but they are also producing more milk and are in better health.
This story is provided by NewsVoir. ANI will not be responsible in any way for the content of this article. (ANI/NewsVoir)