Research advances in understanding the brightest explosions in the Universe 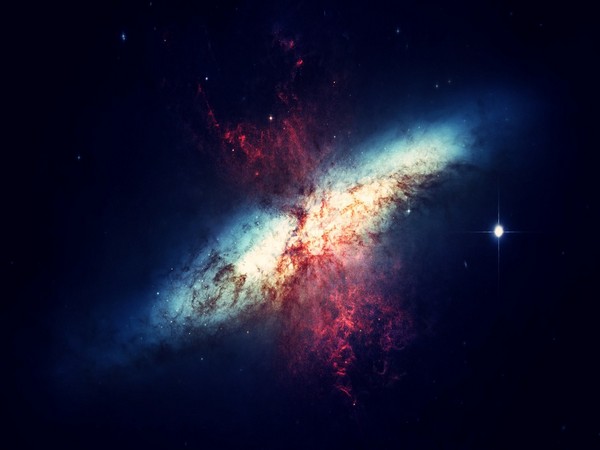 Washington D.C. [USA], Jan 24 (ANI): Finally, the explanation around some unidentified features of one of the brightest stellar explosions one has ever come across is here. The Max Planck Institute for Astrophysics came up with the data on SN 2006gy.

The spectral lines arise from neutral iron - very unusual for such a high-energy event - and imply that more than a third of a solar mass of this heavy element was created. The dominance of iron in the spectrum rules out several previously proposed scenarios for SN 2006gy and instead opened up the door for a new one.
Superluminous supernovae are the brightest explosions in the cosmos. Over a few months, they radiate as much energy as the Sun does over its entire lifetime, reaching a peak brightness exceeding that of an entire galaxy.
The origin of this energy, and what kind of stellar progenitor system has exploded, are still unclear.
One of the most studied objects is SN 2006gy, which was first observed in 2006. It showed signs of interaction between the supernova explosion and circumstellar material, which had been ejected previously.
Many theories have been put forth for SN 2006gy, including collision of shells ejected subsequently by a very massive star, large amounts of radioactivity or a massive stellar explosion called a core-collapse supernova, which arises when the compact core of a massive star collapses to a neutron star, interacting with its own wind.
Researchers at the Max Planck Institute for Astrophysics (MPA), in collaboration with the Japanese team, have now been able to identify these lines as originating from neutral iron.
"This low-energy state of iron is typically not seen in supernovae, where the high energies involved tend to strip one or several electrons from the atoms," explains Anders Jerkstrand, from MPA and lead author of the new study.
In addition, normally the supernova expands too fast for individual iron features to be clearly seen.
"This particular set of lines has never been seen before in any kind of astrophysical nebula," Jerkstrand adds, "SN 2006gy must truly have some unusual physical properties."
That the spectrum mostly consists of iron excludes several previously suggested scenarios without iron. Further, the scientists determined that the iron mass amounts to at least a third of a solar mass, which surprisingly points to a Type Ia supernova.
This type of supernova arises when a white dwarf remnant from a low-mass star, accretes material and explodes.
The progenitor system was a double star consisting of a white dwarf in a close orbit with a more massive hydrogen-rich companion star, suggests research. As the hydrogen-rich star expanded its size - such giant stars can become as big as the Earth-Sun distance or even bigger - the white dwarf got trapped in the larger star's atmosphere and spiralled in towards the center.
In this process, the envelope is ejected. Once the white dwarf reaches the core of the other star, it explodes. The expanding shock wave of this Ia supernova then collides with the previously ejected envelope, and in this gigantic collision, extremely intense light is radiated.
By modelling this light, the researchers could demonstrate that the suggested scenario reproduces the key properties of SN 2006gy - in particular including features of neutral iron.
"The results are significant in several ways", says coauthor Keiichi Maeda from Kyoto University. (ANI)