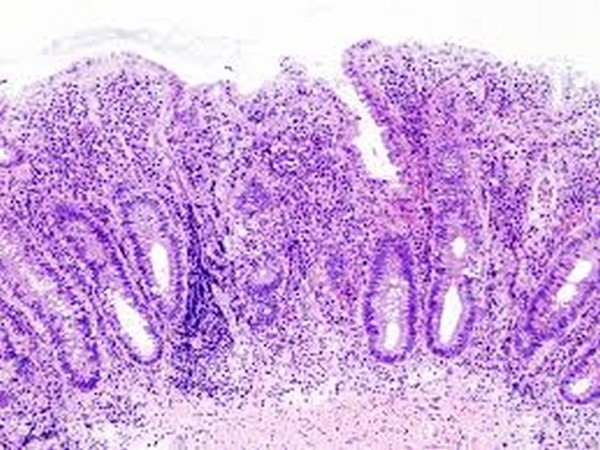 Inflammatory bowel disease (IBD) is a complex autoinflammatory disease determined by genetic and environmental factors and is the major cause of gastrointestinal cancer. Because of its complex and refractory character, researchers have focused on determining the detailed pathogenesis of IBD and finding an effective therapy for it. The study was published in the journal PNAS.
Prof. SUN Bing's team from the Center for Excellence in Molecular and Cellular Science, Institute of Biochemistry and Cell Biology of the Chinese Academy of Sciences, in collaboration with Prof. LIU Jie from Huashan Hospital, Fudan University, revealed a new mechanism involved in the pathogenesis of IBD and suggested therapeutic targets for the clinical trial.
Among the identified IBD-susceptibility genes (NOD2, IL-23, etc.), extracellular matrix protein-1 (ECM1) gene was found to be strongly related to UC in 2008. Since 2011, several studies from SUN's lab have reported the disease-related functions of ECM1 in Th2, Th17 and Tfh cells. However, no available evidence suggested that ECM1 plays a direct role in IBD.
In this study, the researchers analysed tissue samples from patients with ulcerative colitis and a DSS-induced IBD mice model.
They found that ECM1 was highly expressed in macrophages, particularly tissue-infiltrated macrophages under inflammatory conditions, and ECM1 expression was significantly induced during IBD progression. The macrophage-specific knockout of ECM1 resulted in increased arginase 1 (ARG1) expression and impaired polarization into the M1 macrophage phenotype after lipopolysaccharide (LPS) treatment.
Further study showed that ECM1 protein could regulate M1 macrophage polarization through the GM-CSF/STAT5 signalling pathway. Pathological changes in mice with dextran sodium sulfate-induced IBD were alleviated by the specific knockout of the ECM1 gene in macrophages.
These results reveal a role for the IBD-susceptibility gene ECM1 in colitis and the possible existence of a GM-CSF/STAT5 regulatory axis in macrophages, indicating that the attenuation of ECM1 function in macrophages is a potential strategy for IBD therapy. (ANI)