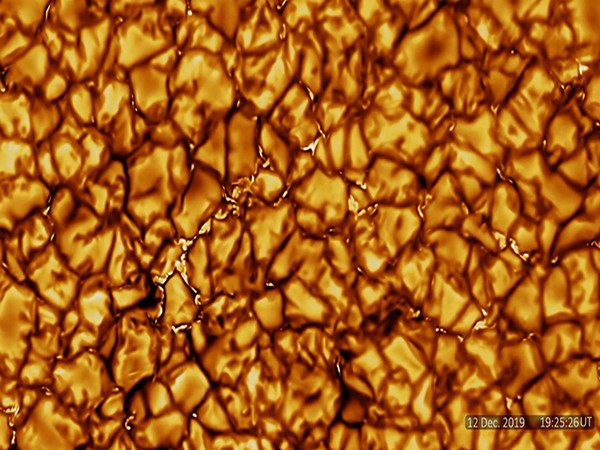 The imagery which was released on January 29, 2020, provides a view of cell-like structures that are of the size of Texas rolling on the surface of the Sun. It also shows tiny footprints of magnetism that reach in the space.
Scientists that operated the telescope said that the unprecedented detail demonstrates the power of the telescope based on the ground for mapping the magnetic fields within the corona of the Sun, where solar eruptions occur impacting life on Earth.
Activities like these can disrupt air travel, lead to blackouts and disable technologies like GPS used for navigation.
"It is literally the greatest leap in humanity's ability to study the Sun from the ground since Galileo's time. It's a big deal," said a researcher Professor Jeff Kuhn.
A team of IfA scientists created two complex infrared instruments that will allow scientists to predict the magnetic activity of Sun and solar storms. The first is known as Cryogenic Near-Infrared Spectropolarimeter (CryoNIRSP).
The instrument that weighs nearly 2-ton designed to measure the magnetism of the Sun beyond the visible solar disk. The second instrument - Diffraction-Limited Near-IR Spectropolarimeter (DL-NIRSP) - allows DKIST to view the evolution of the magnetism fields of Sun in extreme detail.
"These instruments use sensitive infrared technology and complex optics that reveal sunspots and small magnetic features, and how their magnetism reaches into space. With these new tools we expect to learn how the Sun interacts with the Earth," said Kuhn.
DKIST is till date, the largest and most powerful solar telescope in the world, and it stands on the 10,000-foot summit of Maui's majestic Haleakala, which roughly translates to 'the house of the Sun.'
The favourable atmospheric conditions of Haleakala provide the best location for it, as it was proven by the National Solar Observatory and IfA.
The special optical design of the four-meter telescope allows the measurement of the magnetism of the Sun out in the space. It is also modeled after the UH/IfA designed proof-of-concept SOLARC telescope, in operation on Haleakala since 2001.
While the four-meter solar telescope isn't set to be completed until June, scientists will continue preliminary tests by making observations of the Sun in the coming months. But pointing a telescope directly at the scalding sphere comes with challenges.
The Sun's sweltering surface temperature is about 6,000 degrees Celsius. A specialized cooling system is in place to protect DKIST from massive amounts of heat.
"The focus of the telescope mirror is hot enough to melt metal within a short time. To deal with these heat problems we make the equivalent of a swimming pool full of ice every night to provide cooling for the optics and structure during the day," said the director of the Inouye Solar Telescope Thomas Rimmele.
More than 7 miles of piping will distribute coolant throughout the observatory.
The state-of-the-art telescope was renamed in honor of the late Sen. Daniel K. Inouye, a strong supporter of STEM education. (ANI)