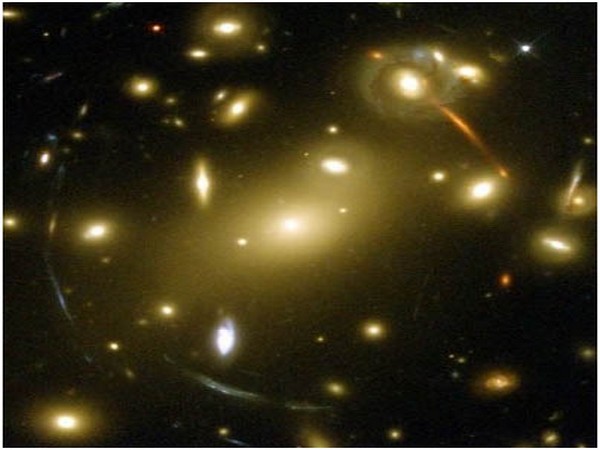 California [USA], Jan 16 (ANI): We know that it exists and makes up about a quarter of our universe, but we are yet to see a particle of the elusive dark matter.

Although our current knowledge of this mysterious substance is highly limited, it can be said with a certain degree of surety that the gravity of clumps of dark matter can distort light from distant objects.
Chris Fassnacht, a physics professor at the University of California, Davis and his colleagues are using this distortion, called gravitational lensing, to measure the temperature of dark matter.
The standard model for dark matter is that it is 'cold,' meaning that the particles move slowly compared to the speed of light, Fassnacht said.
This is also tied to the mass of dark matter particles. The lower the mass of the particle, the 'warmer' it is and the faster it will move.
The model of cold (more massive) dark matter holds at very large scales, Fassnacht said, but doesn't work so well on the scale of individual galaxies.
That's led to other models including 'warm' dark matter with lighter, faster-moving particles. 'Hot' dark matter with particles moving close to the speed of light has been ruled out by observations.
Former UC Davis graduate student Jen-Wei Hsueh, Fassnacht, and colleagues used gravitational lensing to put a limit on the warmth and therefore the mass of dark matter.
They measured the brightness of seven distant gravitationally lensed quasars to look for changes caused by additional intervening blobs of dark matter and used these results to measure the size of these dark matter lenses.
If dark matter particles are lighter, warmer and more rapidly-moving, then they will not form structures below a certain size, Fassnacht said.
"Below a certain size, they would just get smeared out," he said.
The results put a lower limit on the mass of a potential dark matter particle while not ruling out cold dark matter, he said.
The team's results represent a major improvement over a previous analysis, from 2002, and are comparable to recent results from a team at UCLA.
Fassnacht hopes to continue adding lensed objects to the survey to improve the statistical accuracy.
"We need to look at about 50 objects to get a good constraint on how warm dark matter can be," he said. (ANI)