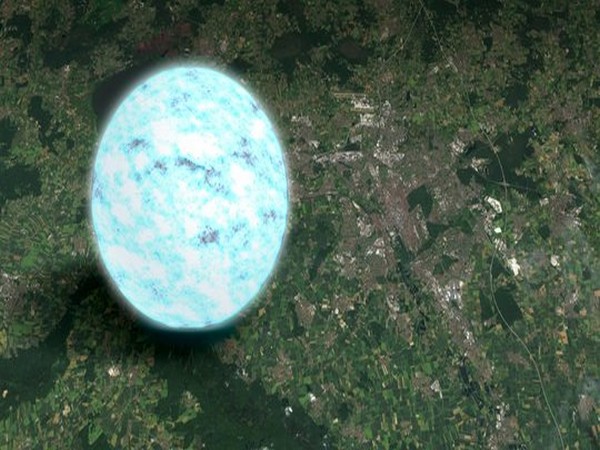 They achieved the feat by combining a general first-principle description of the unknown behavior of neutron star matter with multi-messenger observations of the binary neutron star merger GW170817.
Their results, which appeared in Nature Astronomy on March 9, are more stringent by a factor of two than previous limits and show that a typical neutron star has a radius close to 11 kilometers.
They also find that neutron stars merging with black holes are in most cases likely to be swallowed whole unless the black hole is small and/or rapidly rotating.
This means that while such mergers might be observable as gravitational-wave sources, they would be invisible in the electromagnetic spectrum.
"Binary neutron star mergers are a gold mine of information! Neutron stars contain the densest matter in the observable universe," said Collin Capano, a researcher.
"In fact, they are so dense and compact that you can think of the entire star as a single atomic nucleus, scaled up to the size of a city. By measuring these objects' properties, we learn about the fundamental physics that govern matter at the sub-atomic level," said Capano.
"We find that the typical neutron star, which is about 1.4 times as heavy as our Sun, has a radius of about 11 kilometers," said Badri Krishnan.
"Our results limit the radius to likely be somewhere between 10.4 and 11.9 kilometers. This is a factor of two more stringent than previous results," said Krishnan.
Neutron stars are compact, extremely dense remnants of supernova explosions. They are about the size of a city with up to twice the mass of our Sun.
How the neutron-rich, extremely dense matter behaves is unknown, and it is impossible to create such conditions in any laboratory on Earth. Physicists have proposed various models (equations of state), but it is unknown which (if any) of these models correctly describe neutron star matter in nature.
Mergers of binary neutron stars -- such as GW170817, which was observed in gravitational waves and the entire electromagnetic spectrum in August 2017 -- are the most exciting astrophysical events when it comes to learning more about the matter at extreme conditions and the underlying nuclear physics.
From this, scientists can, in turn, determine the physical properties of neutron stars such as their radius and mass.
The research team used a model based on a first-principles description of how subatomic particles interact at the high densities found inside neutron stars.
Remarkably, as the team shows, theoretical calculations at length scales less than a trillionth of a millimeter can be compared with observations of an astrophysical object more than a hundred million light-years away.
"It's a bit mind-boggling. GW170817 was caused by the collision of two city-sized objects 120 million years ago when dinosaurs were walking around here on Earth. This happened in a galaxy a billion trillion kilometers away. From that, we have gained insight into sub-atomic physics," said Capano.
The first-principles description used by the researchers predicts an entire family of possible equations of state for neutron stars, which are directly derived from nuclear physics.
From this family, the authors selected those members that are most likely to explain different astrophysical observations. They picked models, which agree with gravitational-wave observations of GW170817 from public LIGO and Virgo data, that produce a short-lived hyper-massive neutron star as a result of the merger, and which agree with known constraints on the maximum neutron star mass from electromagnetic counterpart observations of GW170817.
This not only allowed the researchers to derive robust information on dense-matter physics, but also to obtain the most stringent limits on the size of neutron stars to date.
"These results are exciting, not just because we have been able to vastly improve neutron star radii measurements, but because it gives us a window into the ultimate fate of neutron stars in merging binaries," said another researcher Stephanie Brown.
The new results imply that, with an event such as GW170817, the LIGO and Virgo detectors at design sensitivity will be able to easily distinguish, from gravitational waves alone, whether two neutron stars or two black holes have merged.
For GW170817, observations in the electromagnetic spectrum were crucial to making that distinction.
The research team also finds that for mixed binaries
(a neutron star merging with a black hole), gravitational-wave merger observations alone will have a hard time distinguishing such events from binary black holes.
Observations in the electromagnetic spectrum or gravitational waves from after the merger will be crucial to tell them apart.
However, it turns out that the new results also imply that multi-messenger observations of mixed binary mergers are unlikely to happen.
"We have shown that in almost all cases the neutron star will not be torn apart by the black hole and rather swallowed whole. Only when the black hole is very small or rapidly spinning, can it disrupt the neutron star before swallowing it; and only then can we expect to see anything besides gravitational waves," said Capano.
In the next decade, the existing gravitational-wave detectors will become even more sensitive, and additional detectors will begin observing.
The research team expects more very loud gravitational-wave detections and possible multi-messenger observations from merging binary neutron stars. Each of these mergers would provide wonderful opportunities to learn more about neutron star and nuclear physics. (ANI)