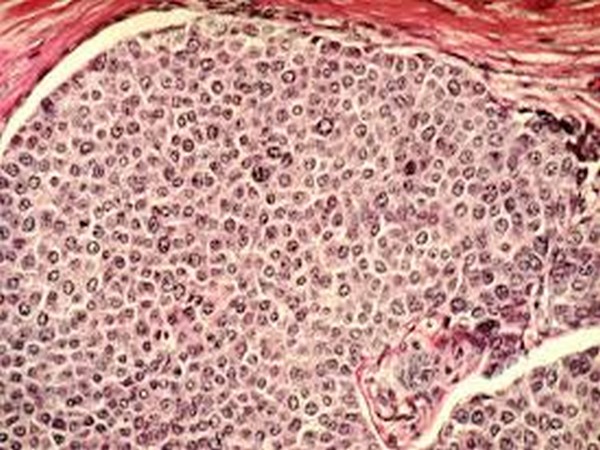 The study was published in Molecular Cancer Research, a journal of the American Association for Cancer Research.
According to Yanming Wang, PhD, professor at the Henan University in Kaifeng, China, "Breast cancer is a leading cause of cancer-related death among women. Patients with metastatic breast cancer have a high risk of death. The purpose of our study was to understand the cellular factors that may contribute to metastasis."
Wang, a former graduate student Lai Shi, PhD, and their colleagues examined the role of PAD4, a protein that can modify DNA-compacting proteins called histones, thereby loosening DNA compaction. PAD4 is highly enriched in neutrophils, a type of immune cell, where its effect on DNA compaction leads to the formation of DNA and protein networks outside the cell called neutrophil extracellular traps (NETs). The normal role of NETs is to trap invading microbes, but studies have shown that NETs released by neutrophils can also facilitate cancer metastasis. Moreover, another study showed that high expression of PAD4 was sufficient to cause cells other than neutrophils to form similar structures.
"In addition to its high expression in neutrophils, PAD4 is highly expressed in malignant tumours of various cell types; however, the role of PAD4 in breast cancer cells has been elusive," said Wang. "We were interested in learning if PAD4 expression in breast cancer cells could affect cancer biology, such as tumour growth and metastasis."
To understand PAD4 expression levels in breast cancer cells, Wang and colleagues performed a meta-analysis of gene expression profiles from The Cancer Genome Atlas and the Oncomine database. Results from the meta-analysis showed that human breast cancer cells were more likely than normal cells to have increased PAD4 expression. Consistent with this finding, a mouse breast cancer cell line called 4T1 had higher PAD4 levels than cell lines from other cancer types.
Due to PAD4's known roles in DNA compaction and NET formation, Wang and colleagues examined how PAD4 expression in breast cancer cells impacts the structure of DNA-protein networks known as chromatin. They found that activation of PAD4 in 4T1 cells led to the modification of histones and the release of chromatin fibers outside the cell. The released chromatin fibers formed NET-like structures, which the authors referred to as cancer extracellular chromatin networks (CECNs).
Further experiments demonstrated that PAD4 was required for the formation of CECNs, both in cell culture and in allograft tumours in mice. By comparing the growth and spread of allograft tumours that did or did not express PAD4, the authors observed that PAD4-expressing tumours grew significantly faster in mice and had significantly more metastases in the lungs, which are the usual site of 4T1 metastasis. Further experimentation revealed that PAD4 promoted the growth of metastatic tumors after cancer cells had reached the lungs.
"Together, our results demonstrate that PAD4 expression in breast cancer cells promotes CECN formation, primary tumour growth, and lung metastasis in mice," said Wang. "The exact mechanism by which PAD4 exerts these effects is something we are actively investigating." Understanding how PAD4 promotes tumour growth and metastasis could help researchers develop drugs to target this process, explained Wang.
"While further investigation is needed, it is interesting to consider the possibility that PAD4 or CECNs could potentially be used as biomarkers to predict disease progression. Furthermore, therapies to inhibit PAD4 or eliminate CECNs could be explored as a method to reduce the risk of metastasis in patients with breast cancer," Wang added. Wang and colleagues are also interested in investigating if PAD4 contributes to progression or metastasis of other cancers.
A limitation of the study is that it was performed using a single cell line. Thus, studying additional cell types and human breast cancer samples will be needed to understand the prevalence of CECN formation and PAD4's role in the process, Wang noted. (ANI)