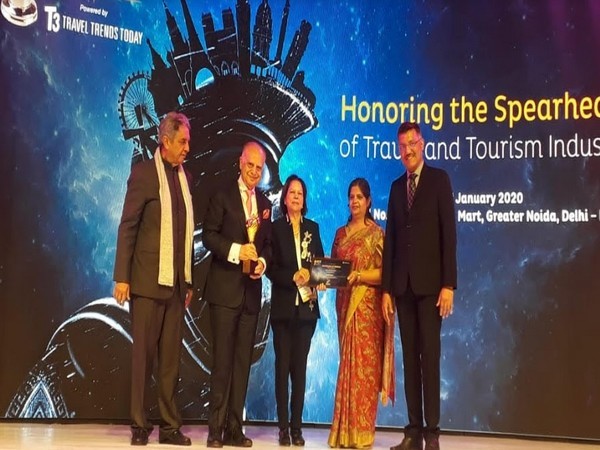 The 27th edition of South Asia's largest travel and tourism exhibition, SATTE being held from January 08 to January 10, 2020, at the India Exposition Mart Ltd., Greater Noida. The fourth edition esteemed award function was held on January 09, 2020, on the second day of the twenty-seventh edition of SATTE.
SATTE - South Asia's leading travel show has established India as one of the most sought-after tourist destinations on the global tourism map by bringing stakeholders from across the world under one roof.
The SATTE awards have been an opportunity to honour excellence and recognise the outstanding achievements of market leaders who break the mundane cycle and innovate in order to create new benchmarks in the industry and the awards have been established as one of the most credible awards for the travel and hospitality industry.
'The Lifetime Achievement Award' was presented to Advani by VK Duggal, the Chairman of the SATTE 2020 jury.
One of Sunder Advani's major contributions to the hospitality industry was to obtain relief on the GST rate charged on hotel rooms. Originally any hotel where even one room was sold at a rate of over INR 7500 was required to levy a GST of 28 per cent. After representations appointed him as Chairman of the World Travel and Tourism Council (India Initiative).
He rallied against the cause and obtained the support of the Minister of Tourism of India, Prahlad Singh Patel to bring down the highest GST down from 28 per cent to 18 per cent and brought relief to the whole industry.
"It is indeed a great honour for me to win the 'Lifetime Achievement Award' by an eminent jury of SATTE, a body which has members across South Asia. This award is especially important as I'm being conferred at the Largest Travel and Tourism exhibition in Asia and in front of my respected peers and industry leaders. I will cherish this prestigious award forever," said Sunder Advani.
At the age of 81 years, he continues to work as the Chairman and Managing Director of the 200 room five-star Deluxe Caravela Beach Resort, Goa which is owned and operated by Advani Hotels and Resorts (India) Ltd.
"We only own one hotel, but last year the Mumbai Stock Exchange showed that we stand among the top 1000 listed companies and that makes me proud of my legacy. I am also pleased that I could bring Holiday Inns & Ramada into South Asia and with that kick-start the casino industry in India. In the last few years, I have also started to spend my time in helping the Government of Goa and India in boosting tourism," Advani added.
He further said, "I would also like to encourage everyone to wholeheartedly focus on increasing tourism in our region. We have a lot to offer but have a lot of competition globally and it is, therefore, important to continue to do what is necessary to improve the competitiveness of this critical industry in India."
This story is provided by NewsVoir. ANI will not be responsible in any way for the content of this article. (ANI/NewsVoir)