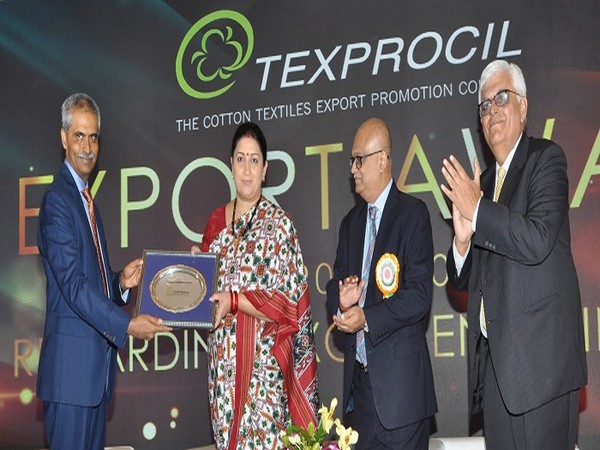 Mumbai (Maharashtra) [India] Jan 23 (ANI/BusinessWire India): The Cotton Textiles Export Promotion Council (TEXPROCIL), the first export promotion council set up in India in the year 1954 and responsible for promoting exports of cotton textile celebrated the achievements of its member exporters at the Annual Awards function held at the ITC Hotel Grand on 16th January 2020.

Every year the council recognizes the role played by exporters by giving out awards in different categories. This year the council distributed fifty-eight awards in thirty-two different categories, including the coveted Platinum trophy for the highest global exports.
Recognising the role played by MSME units in India and given that the growth of MSMEs is one of the many thrust areas of the government, TEXPROCIL also added an award for the highest employment generated by MSME units this year.
Smriti Zubin Irani, Minister of Textiles and Women and Child Development, was the Chief Guest at the TEXPROCIL Annual Export Award function held on January 16th, 2020 in Mumbai.
While congratulating the award winners, Dr KV Srinivasan, Chairman, TEXPROCIL in his opening remarks stated that the exports of textiles & clothing were severely affected by the global situations like the trade conflict of US with China, EU's struggle with Brexit, the growing geo-political tensions in the Middle East and the removal of GSP benefits to India by the US.
In the backdrop of these challenges, the Chairman thanked the government for taking the initiative in recognising the incidence of state and central tax levies and their impact on the competitiveness of exported textile goods by announcing the new scheme of the Remission of Duties or Taxes on Export Products i.e. RoDTEP, which he hoped will address the issues of duties and taxes suffered by the entire value chain.
The Chairman also lauded the Minister for her personal efforts to get the Gazette Notification of March 7, 2019, announcing RoSCTL for garments & made-ups implemented vide notification dated January 14, 2020.
Dr Srinivasan also requested the Minister to consider the cotton textiles sector as a value chain in continuum mentioning that any attempt to selectively grant incentives to certain segments of the value chain leads to unintended distortions and consequences. "A case in point is the systematic exclusion of cotton yarn from the package of incentives since 2014", he added.
"Cotton yarn also bears the same incidence of state and central levies as in the case of made-ups and garments. He said that cotton yarn should be covered under the RoSCTL scheme and the MEIS and should also be covered under the 3 per cent Interest Equalization scheme", he further reiterated.
The Chairman finally concluded by thanking the Minister for her personal intervention in various matters relating to the progress and growth of the industry.
The General Manager (SME), State Bank of India S Kalyanram then addressed the gathering on the significance and importance of the relationship between the banks and the exporters and highlighted the facilities provided for MSMEs.
The Chief Guest, Smriti Zubin Irani then distributed the TEXPROCIL Awards.
In her address, the Minister said that with the growth of the textile industry lies the growth of India and also thanked SBI for being part of the ceremony and supporting the industry as bankers play an important role in textile and clothing exports. She said that the textile industry has made India proud through its achievements only because of the commitment and dedication of the current and earlier generations.
The Minister was also in agreement with the many issues pointed out by the Chairman TEXPROCIL in his welcome address.
Coming to the cotton procurement and auction process, the Minister promised speedy resolutions in honouring commitments and selling the fibre at competitive prices rather than being purchased and then stocked by CCI.
Irani also assured the industry that she will continue to pursue in bringing the hank yarn obligation down further from the current percentage of production.
The Minister also mentioned that in the new Mission on Cotton she will explore ways of replicating the success of CDRA which is presently benefiting about 170,000 farmers.
She said that the industry should make farmers partners and along with gainful employment for women the sector should look at quadrupling its exports and assured that the Ministry will also stand shoulder to shoulder with the industry in these efforts.
Irani requested the Chairman Texprocil to handhold small companies and take them along so that they may reach the level of medium-sized companies.
Finally appreciating the efforts of Texprocil for leading from the front she requested CCI, TEXPROCIL, and the Skill Development Ministry to come together and prepare a paper on mechanizing the cotton-picking methods to reduce contamination and assured the full support of the Ministry of Textiles towards this effort.
Manoj Patodia, Vice Chairman of Texprocil then proposed a Vote of Thanks.
This story is provided by BusinessWire India. ANI will not be responsible in any way for the content of this article. (ANI/BusinessWire India)