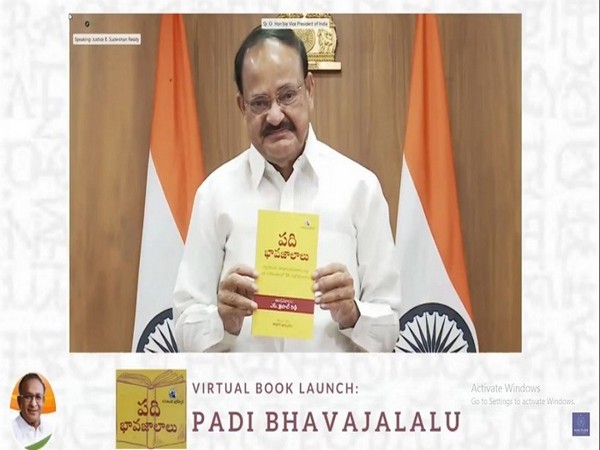 The Vice President of India M Venkaiah Naidu launched the book virtually amidst the presence of Jaipal Reddy's family members, followers, admirers, and politicians from across political lines and ideologies.
B Sudarshan Reddy, Former Justice, Supreme Court of India; Dr YY Reddy, Former Governor, RBI and Sitaram Yechury, General Secretary, CPI (M), graced the occasion and others.
Vikram of Manthan conducted the proceedings of the virtual launch. Arvind Reddy, Son of Jaipal Reddy, proposed cites of thanks. The launch was graced by Lakshmi, wife of late Jaipal Reddy, and all his family members.
Addressing the gathering Vice President, recalled his association with Jaipal Reddy. Jaipal Reddy's glory is spread all over the world.
Releasing online a Telugu book, 'Padi Bhavajalalu', a translation of the English book "Ten Ideologies- The great asymmetry between agrarianism and industrialism", the Vice President described the late leader as a rare politician, who was popular across the political spectrum.
The Vice President called Jaipal Reddy a rare politician who stayed in political life for decades without compromising his ideological outlook and personality.
He would always be remembered for his oratory, simplicity, and down-to-earth attitude informed Venkaiah Naidu Vice President called him as one of the best parliamentarians of times.
The Vice President paid rich tributes to the late leader and his dear friend.
Reddy's logical thinking, analytical abilities, a deep sense of understanding of a subject are unparalleled. The book is the confluence of all these, observed Venkaiah Naidu.
"The book is excellently translated by Kalluri Bhaskaram," said Vice President.
"Jaipal Reddy, served the nation with distinction," said Venkaiah Naidu.
"Idealism is on the wane in politics on the other side 'Mayajalam' (the magic, the dramatization, the exhibitionism) is on the rise," observed Venkaiah Naidu.
YV Reddy described Jaipal Reddy as a great parliamentarian. The book is worth reading and even more worth thinking about the issues raised.
"People say that one does not understand spiritualism. It is true, but the spiritualization is also possible through atheism," observed Seetharam Yechuri. "The association was long and lasted beyond 30 years," he shared.
"Jaipal Reddy is a towering personality. He believed in the political process. He was the staunch believer of parliamentary democracy" said Justice Bu Sudarshan Reddy.
The virtual launch was organized under the aegis of Manthan, a popular forum for public discourse. It is published by Orient BlackSwan, a seven-plus decades old, Orient Blackswan, one of India's best known and most respected publishing houses. The book is translated into Telugu by Kalluri Bhaskaram, Senior Journalist.
The original English version of the book Ten Ideologies -- The Great Asymmetry between Agrarianism and Industrialism review was launched by former Prime Minister of India, Manmohan Singh in August 2018. The book discusses ten major ideologies that shaped the world.
A politician par excellence, Reddy was the Member of Parliament seven times and Union Cabinet Minister thrice. He had a political career spanning over 50 years. He was a brilliant parliamentarian known for his oratorical skills and political acumen.
His speeches were packed with knowledge, information, criticism, and wit. He passed away last year (2019) on July 28th at the age of 77 years, who despite his physical disability carried on his journey with grit, determination and stood as an inspiration to many.
This story is provided by BusinessWire India. ANI will not be responsible in any way for the content of this article. (ANI/BusinessWire India)