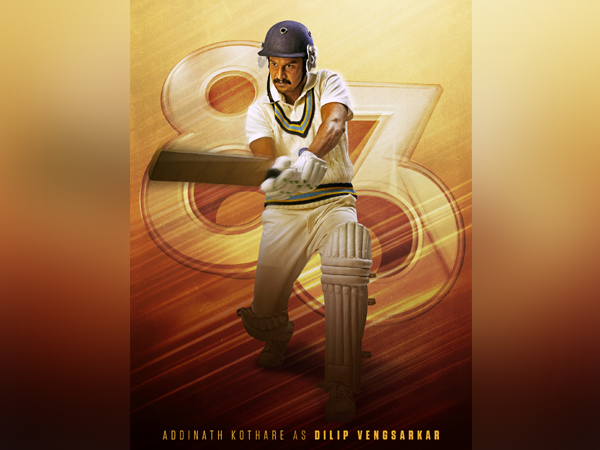 The 34-year-old actor hopped on to Twitter and shared the poster featuring the ace batsman of the time and called him by his nickname 'The Colonel'.
"THE COLONEL !!! The finest exponent of the drive and the finest gentleman cricketer Presenting @adinathkothare as DILIP VENGSARKAR," Singh captioned the picture.
In the poster, Adinath Kothare was caught in the shot batting with all his force.
Kothare was seen acing the character of the cricketer who is known to be a prolific batsman.
At the zenith of his career, Vengsarkar was rated to be the best batsman in the Coopers and Lybrand rating which is a predecessor of the PWC ratings. The cricketer was positioned at the number one slot for a period of 21 months in a row till March 2, 1989.
Earlier, Ranveer had shared nine character posters besides that of Kapil Dev which is portrayed by him.
Previous posters featured Hardy Sandhu, Nishant Dahiya, Dinker Sharma, Chirag Patil, Tahir Raj Bhasin, Jiiva, Saqib Saleem, Jatin Sarna, and Sahil Khattar.
The sports-drama also has Deepika Padukone in the lead role opposite Ranveer.
The movie also features R Badree, Pankaj Tripathi, Ammy Virk, and Saahil Khattar as the Men in Blue. Helmed by Kabir Khan, the movie is slated for release on April 10. (ANI)
ADVERTISEMENT