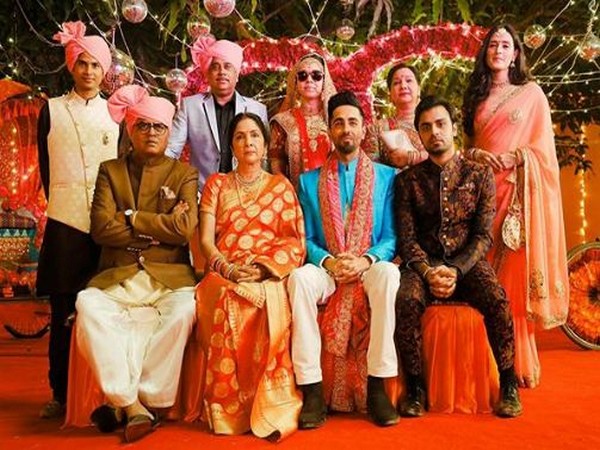 New Delhi [India], Feb 1 (ANI): Ayushmann Khurrana, who is starring in 'Shubh Mangal Zyada Saavdhan' alongside Gajraj Rao and Neena Gupta, believes that the two are currently the most loved on-screen parents for the audiences.

For Ayushmann -- who essays the role of a gay man in the movie -- what makes this film special is that he would be teaming up with Gajrao Rao and Neena Gupta who played his parents in 'Badhai Ho', and now will be seen as the parents of his on-screen partner.
Ayushmann feels given their brilliant acting and on-screen chemistry, viewers would be eager to see Gajraj and Neena together once again.
"Gajraj sir and Neena Ji are the most loved on-screen parents for audiences today and it is such a pleasure to have them in Shubh Mangal Zyada Saavdhan. They have won over the audiences and their hearts with their stellar performance and such endearing on-screen chemistry in Badhai Ho. I was super thrilled when I got to know that I will get to work with them again. This time our relationship is a little different, they play parents to my on-screen partner but the energy we have between us is simply infectious," said Ayushmann.
Ayushmann revealed that his scenes with Rao would tickle the funny bone of all the moviegoers. He said that "Gajraj sir is hilarious as the antagonist to my love life and it's really funny to have him as the overbearing father who refuses to believe that his son is gay! It is basically him vs me in the film and his scenes with me are incredibly funny and will crack the audiences up. They are some of the most memorable scenes of the film."
The actor says Gajraj and Neena are a "riot" in the film and they will liven up the theatres with their impeccable comic timing.
He added that "Neena Ji and I have a very interesting bond and it's really special because she plays the mother of my on-screen partner. They are a riot together in our film and they bring the house down with their brilliant acting and comic timing. Their presence in our film takes the entertainment quotient to another level."
Ayushmann Khurrana is on an uninterrupted streak of seven consecutive hit movies and is looking to extend his run at the box office with his upcoming flick. (ANI)
ADVERTISEMENT