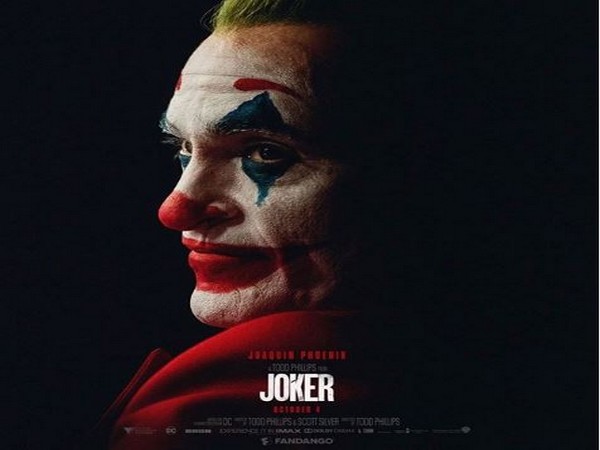 Washington D.C. [USA], Oct 5 (ANI): Joaquin Phoenix-starrer 'Joker' has been hogging the limelight ever since its inception. While the actor has received rave reviews for his portrayal of the iconic Batman villain, the film has been facing flak amid fears that it could trigger violence.

And as the controversy surrounding the film refuses to die down, it has been hit with another setback.
A movie theater in Huntington Beach, California, cancelled the screenings of 'Joker' on Thursday night after a "credible" threat was reported to the police, the Huntington Beach Police Department said on Friday, reported Variety.
The final two screenings of the movie at the Century Huntington Beach and XD theater in the Bella Terra shopping centre were cancelled after officers were sent to the scene. The showings resumed on Friday.
The Huntington Beach Police Department said in a statement that it had received information about a threat to the Century Theater in response to the opening of the DC film.
"The police department deemed the threat was credible enough to provide a uniformed presence at the theater," the statement said.
"As the investigation continued, our officers worked with the managers of the theater, who determined they would cancel the final two showings of the movie and close the theater out of an abundance of caution. Based on the investigation, and in working with theater management, it was determined that the theater could safely reopen and resume normal operation," the statement added.
The police did not reveal any details about the nature of the threat.
Although the screenings resumed, the police said that "The Huntington Beach Police Department will provide patrols at Century Theater for the rest of this weekend."
"We are working in conjunction with the theater's management as well as mall security to provide a safe environment to the public. This incident is currently under investigation, and no further details will be provided," the police added.
The film's main themes of mental illness and its relationship to violence have caused theatres and law enforcement to worry about the message 'Joker' is sending.
'Joker' features a new take on the comic book character's origin story, and follows an aspiring stand-up comedian called Arthur Fleck (Phoenix) whose mental health issues escalate, ultimately leading him to a life of criminality.
Apart from Phoenix, the movie also features Robert De Niro, Bill Camp, Frances Conroy, Brett Cullen, Glenn Fleshler, Douglas Hodge, Marc Maron, Josh Pais, and Shea Whigham.
The film is getting early Oscar buzz after winning the Golden Lion, the Venice International Film Festival's top award. 'Joker' also received an eight-minute standing ovation at its Venice Film Festival premiere. (ANI)
ADVERTISEMENT