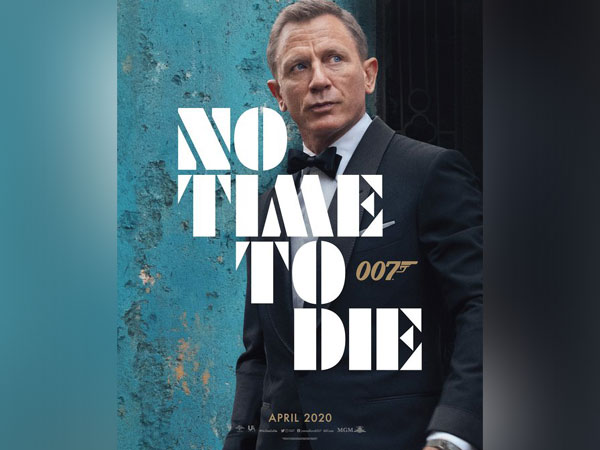 Washington DC [USA], Oct 6 (ANI): Bond is back! The first poster of the upcoming film 'No Time To Die', the next chapter in the 007 saga, has arrived and it features actor Daniel Craig as the suave and iconic fictional spy James Bond.

The first poster of the movie was unveiled on James Bond Day, the 57th anniversary of the world premiere of 'Dr. No.' October 5 marks the day that the very first flick featuring the James Bond character debuted in theaters back in 1962.
And the makers behind 'No Time to Die' clearly thought that it was the best time to debut the poster for the latest 007 adventure.
The makers shared the poster on Instagram which shows Craig suited up in his trademark tux and bowtie with an intense look on his face.
Bringing his signature 007 style, the star looks suave in a sleek black tuxedo and bow tie, paired with a crisp white shirt. In the poster, he can be seen gazing intensely at something in the distance.
"Celebrate #JamesBondDay with the first poster for #NoTimeToDie #Bond25," the caption read. 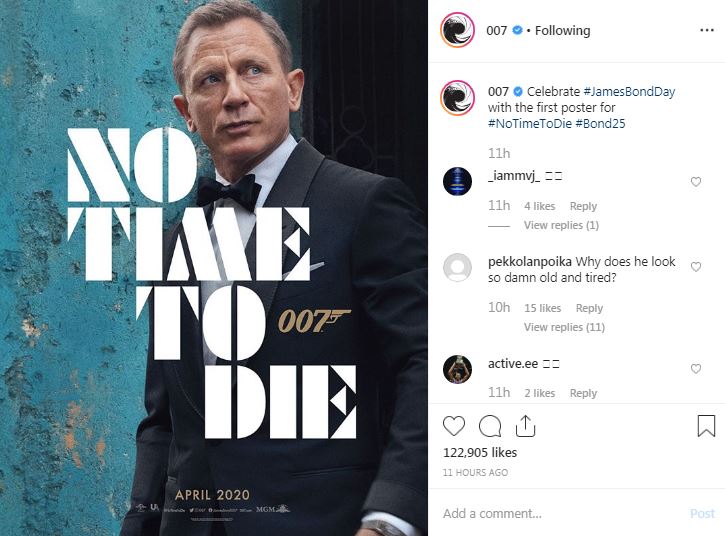 The 25th film in the action spy franchise follows a now-retired Bond who has left active service for a tranquil retirement in Jamaica. But when his old friend Felix Leiter from the CIA turns up asking for help, he is forced to embark on yet another dangerous mission to rescue a kidnapped scientist, leading the secret agent onto the trail of a mysterious villain armed with dangerous new technology, reported Variety.
Apart from Craig, the film also stars Rami Malek (the film's villain), Lea Seydoux, Ana De Armas, Lashana Lynch, Billy Magnussen, Ben Whishaw, and Ralph Fiennes as M.
The film will also see Christoph Waltz reprise his role as James Bond's arch-enemy Ernst Stavro Blofeld. Waltz first appeared in 2015's 'Spectre' as the main villain, who was previously played by Donald Pleasance, Max von Sydow and Telly Savalas in other James Bond movies.
Craig, who is returning for his fifth appearance as the agent in the upcoming movie, will be playing the character for the last time.
Cary Fukunaga is directing the film. He took over filmmaking duties after Danny Boyle departed the project over creative differences. His exit delayed the film's release nearly six months from its original October 2019 release date.
Barbara Broccoli and Michael G. Wilson are producing, and Fukunaga co-wrote the screenplay with Scott Z. Burns and Emmy-winner Phoebe Waller-Bridge.
The film has had a tumultuous journey with reports of issues, including filming delays due to Craig's ankle injury, Rami Malek's conflicting schedule, on-set explosions and actor Grace Jones walking off the set after disappointment in the size of her cameo role.
New footage of Craig in action was unveiled in June following the series of incidents. The movie is slated to hit the big screens on April 8, 2020. (ANI)
ADVERTISEMENT