After 43 years in cinema, Rajinikanth to make TV debut on 'Into The Wild with Bear Grylls' 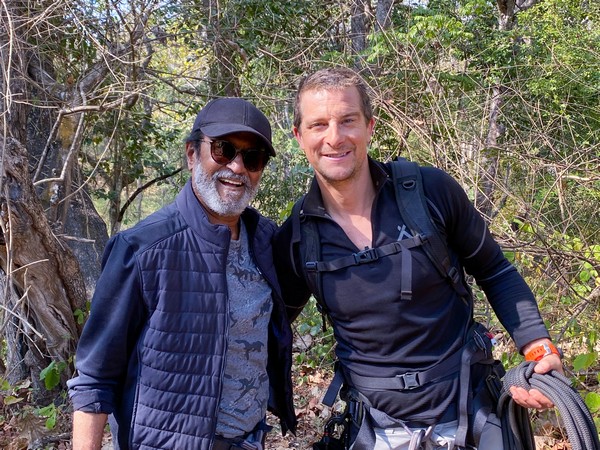 Mumbai (Maharashtra) [India], Jan 29 (ANI): Forty-three years after entering the world of cinema, Rajinikanth is all set to make his television debut on Discovery Channel's programme with British adventurer Bear Grylls, where the superstar will share his thoughts on water conservation.

Discovery has signed Rajinikanth to feature in the first episode of a new format series called 'Into The Wild with Bear Grylls'. The show marks the television debut for Rajinikanth, admiringly addressed as Thalaiva, who has gained cult status for being a humane superstar - simple, humble, generously loved - and adored by millions for more than four decades.
'Into The Wild with Bear Grylls' is an innovative new format inspired by 'Man Vs Wild', which is one of the most-watched wilderness survival television series in the world, according to a statement by Discovery.
Last year, 'Man Vs Wild with Bear Grylls and PM Modi' episode disrupted the Indian media landscape, establishing itself as the TV event of the year. Beyond Modi, Grylls has also hosted prominent celebrities in the past such as then sitting American President Barack Obama, Kate Winslet, Roger Federer, Julia Roberts and many more.
"Into The Wild is a truly unique show - at one level it offers adrenaline-pumping action, while at another, the show lends itself beautifully to driving a specific purpose for the larger good of society. So, when, officials from Discovery approached me, I agreed to finally make my debut on TV after more than four decades of cinema. Kavithalayaa, the iconic production house founded by my guru, K Balachander also played a significant role," Rajinikanth was quoted as saying.
"Bear Grylls has tested the survival skills of multiple celebrity guests, pushing them to their limits. I look forward to the survival challenge in the mesmerising wilderness of India," he said.
Talking about raising awareness about water conservation, the actor said, "Every Indian will need to come forward and contribute to conserving water. This war has to be led at all levels including government, community as well as on the individual front. I believe this show on Discovery is a perfect platform to take the message of conserving water to every home across the country."
On his part, Grylls was all praises for Rajinikanth.
"Our team is all very excited to work closely with Thalaiva. Much more than a cine star, Rajinikanth is a phenomenon who has captivated audiences across the world with his on-screen and off-screen work. He has always shown such energy and flair in all he does and he will need that courage and determination again on our journey into the beautiful wilds of India," Grylls said.
"The combination of Rajinikanth in a never seen before avatar and Bear Grylls' edge of the seat challenges, will make the show a must-watch for every Indian," said, Megha Tata, Managing Director - South Asia, Discovery.
"We have decided to give a layer of purpose to each episode of the newly commissioned series, Into The Wild with Bear Grylls, as we aim to contribute to humanity in our unique way. Last year, the show featuring Prime Minister Modi, generated much-desired attention on conservation of Wildlife; we are confident that the forthcoming episode featuring Rajinikanth will sensitize each one of us about conservation of water," Tata added.
'Into The Wild with Bear Grylls' is produced for Discovery Communications India by The Natural Studios and Banijay Asia, where Grylls, Delbert Shoopman and Deepak Dhar are executive producers. (ANI)
ADVERTISEMENT