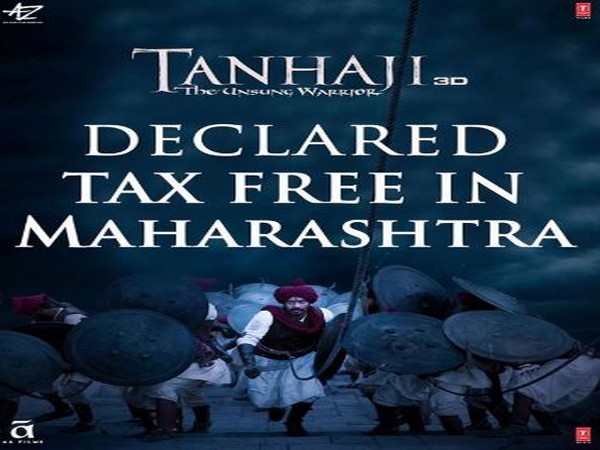 New Delhi [India], Jan 22 (ANI): Ajay Devgn, who is basking in the success of his magnum opus -- Tanhaji: The Unsung Warrior -- thanked Maharashtra Chief Minister Uddhav Thackeray on Wednesday for making the movie tax free in the state.

The 50-year-old actor hopped on to Twitter and shared the thankful message in a tweet that reads: "Thank you Uddhav Thackeray Ji for declaring #TanhajiTheUnsungWarrior tax-free in the state of Maharashtra. @OfficeofUT @CMOMaharashtra."

Earlier on Wednesday, the Maharashtra government declared the biographical-drama -- Tanhaji: The Unsung Warrior -- tax-free in the state.
The move came days after scores of leaders along with Maharashtra's former Chief Minister Devendra Fadnavis wrote to Chief Minister Uddhav Thackeray demanding to make the new release of Devgn tax-free.
Earlier, Thackeray in an event said that he will watch the historical drama along with other ministers.
The movie shows Ajay Devgn essaying the role of Maratha warrior Taanaji Malusare fighting for the principle of 'Bhagwa' (saffron) flag and 'Swaraj' (home-rule) and 'Satya' (truth).
The film is produced by Ajay Devgn's ADF and Bhushan Kumar's T-Series and has been directed by Om Raut. It also features Kajol and Saif Ali Khan in pivotal roles.
The movie has crashed the box-office as it has garnered around Rs 183 crore as on Wednesday, as per the film critic Taran Adarsh. (ANI)
ADVERTISEMENT