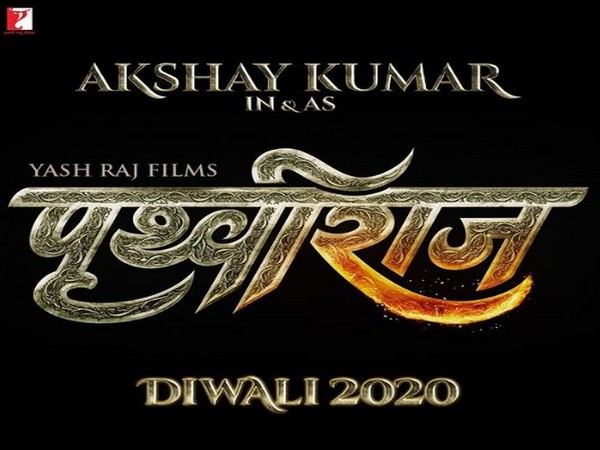 New Delhi (India), Sept 9 (ANI): On his 52nd birthday, Akshay Kumar announced his upcoming film 'Prithviraj' and treated fans with the first-look of the drama which features the actor playing the role of the 12th-century Indian king.
The 'Baby' actor called it his first historical movie which will show him playing the role of Prithviraj Chauhan and shared that he is "humbled" to play a "hero" he looks up to for his "valour and values."

"Elated to share about my 1st historical film on my birthday! Humbled to have the opportunity to play a hero I look up to for his valor & values- Samrat Prithviraj Chauhan in one of my biggest films #Prithviraj. Producer @yrf, director #DrChandraprakashDwivedi, releasing Diwali 2020," he tweeted along with the teaser of the upcoming drama.

Elated to share about my 1st historical film on my birthday!Humbled to have the opportunity to play a hero I look up to for his valor & values- Samrat Prithviraj Chauhan in one of my biggest films #Prithviraj.
Producer @yrf,director #DrChandraprakashDwivedi, releasing Diwali 2020 pic.twitter.com/Q2nD5KE3KR


The first-look is a perfect tease, not revealing anything more than Akshay's role and release date of the film. Going by the short clip, it could be nothing less than an epic historical drama, with Akshay playing the brave king leading his army.
The film will hit the big screens on Diwali 2020 and will be directed by Dr Chandra Prakash Dwivedi, who earlier helmed the biggest television epic 'Chanakya' and the multiple award-winning 'Pinjar'.
It will be bankrolled by Yash Raj Films. While the male lead of the film has been revealed, the makers are yet to announce the female lead.
Speaking about the upcoming project, Akshay said, "It is truly an honour that I will be playing the role of one of the most fearless and courageous kings of India, Prithviraj Chauhan. As a nation, we should always celebrate our heroes and immortalize what they did to propagate the values that Indians lived by."
Calling Prithviraj an inspiration for generations, Akshay stated the film is an attempt to bring to light his "valour and daredevilry."
"Prithviraj was the only person standing in front of a merciless nemesis and the bravery he showed, made him a true Indian hero, an inspiration for generations and a legend. Prithviraj is our attempt to bring to light his valour and daredevilry. So this announcement coming on my birthday has indeed made it more special for me," he said.
'Prithviraj' will reportedly revolve around the First Battle Of Tarain led by Chauhan. It is expected to go on floors by November this year. The biopic will be shot in Mumbai and Rajasthan.
Although this is his first 'historical film', this will not be the first time that the actor takes the audience back in time. He was last seen leading his courageous army in the film 'Kesari' that told the story of the 1897 Battle of Saragarhi, where an army of 21 Sikhs fought against 10,000 Afghans.
Last year, the actor starred in 'Gold', which was based on India's first gold medal win as an independent nation at the 1948 Olympics.
Akshay is currently basking in the success of 'Mission Mangal', which is nearing the Rs 200 crore mark at the box office. The film was based on India's Mars Orbiter Mission and also features Sonakshi Sinha, Vidya Balan, Taapsee Pannu, Kirti Kulhari, Nithya Menen and Sharman Joshi. (ANI)