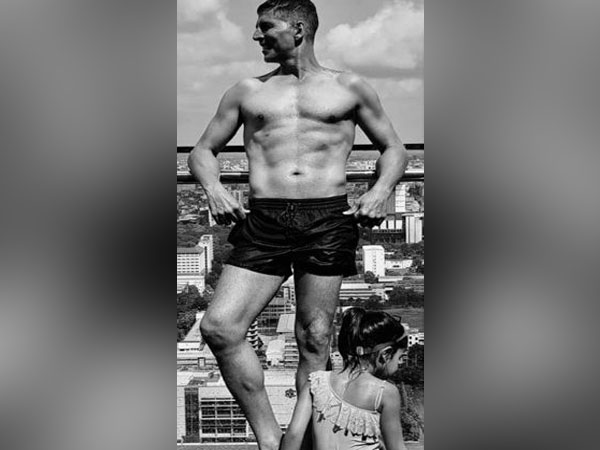 New Delhi (India), Sept 9 (ANI): Bollywood actor Akshay Kumar, who is known to inspire people with his fitness regime, flaunted off his chiselled body while campaigning against the use of supplements for body-building.
The actor who ringed in his 52nd birthday today shared a monochrome picture where 'Khiladi' can be seen flaunting his washboard abs and chiselled body.

Taking to Twitter, the actor has stressed on the importance of staying fit and urged people not to be dependent on supplements and to be true to the body.
"We Are What We Eat... Be a Product of Mother Nature... DON'T be a Product of a Product #anti-supplements. Be true to your body & it'll carry you in ways you only dreamed of at this age...trust me, I'm a father of two. Take care, 1 Life, Get It Right," he tweeted with his monochrome picture.
Scores of celebrities including Ajay Devgn, Vicky Kaushal, Katrina Kaif, Anil Kapoor and many more flooded the social media with their best wishes to the actor.
Apart from the wishes, the actor treated his fans with the first look of the upcoming drama 'Prithviraj' which features the actor playing the role of the 12th-century Indian warrior.
The 'Baby' actor called it his first historical movie which will show him playing the role of Prithviraj Chauhan and shared that he is "humbled" to play a "hero" he looks up to for his "valour and values."
The film will hit the big screens on Diwali 2020 and will be directed by Dr Chandra Prakash Dwivedi, who earlier helmed the biggest television epic 'Chanakya' and the multiple award-winning 'Pinjar'.
It will be bankrolled by Yash Raj Films. While the male lead of the film has been revealed, the makers are yet to announce the female lead.
'Prithviraj' will reportedly revolve around the First Battle Of Tarain led by Chauhan. It is expected to go on floors by November this year. The biopic will be shot in Mumbai and Rajasthan.
Akshay is currently basking in the success of 'Mission Mangal', which is nearing the Rs 200 crore mark at the box office. The film was based on India's Mars Orbiter Mission and also features Sonakshi Sinha, Vidya Balan, Taapsee Pannu, Kirti Kulhari, Nithya Menen and Sharman Joshi. (ANI)