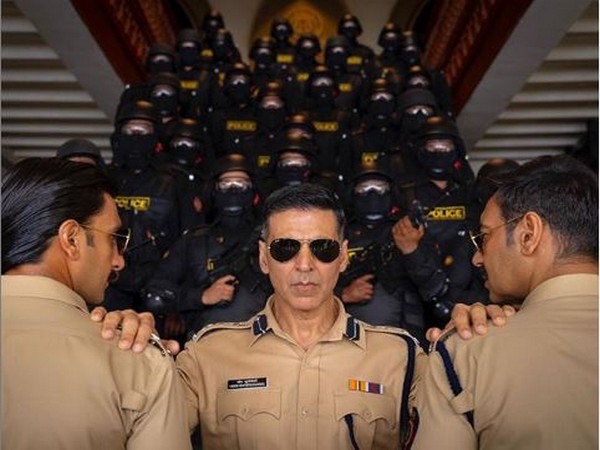 New Delhi (India), Oct 10 (ANI): After Katrina Kaif spilled the beans about Akshay Kumar's character in 'Sooryavanshi' with the picture of a name badge, Akshay on Thursday shared a photo of his 'Desi Avengers.'

Bollywood's 'Khiladi' shared a picture from the sets of the film where he can be seen sharing the screen with Ranveer Singh who played the role of Sangram Bhalerao in 'Simmba' along with Ajay Devgn who played Bajirao Singham in 'Singham.'
Calling themselves the "Desi Avengers of the cop universe", the trio can be seen in their angry cop avatar along with armed soldiers in the background.
"The desi Avengers of the Cop universe!When 'Singham' meets 'Simmba' meets #Sooryavanshi, expect not just fireworks but a full-blown blast on 27th March 2020," he tweeted. 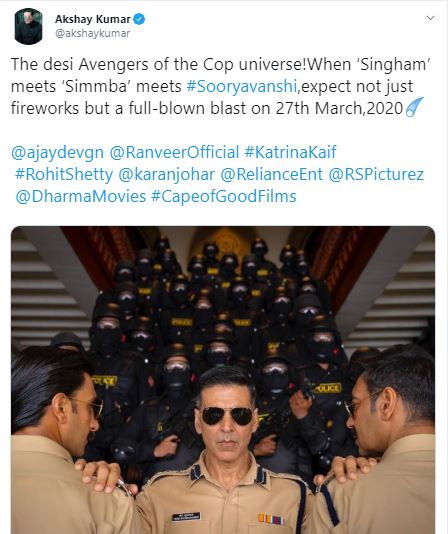 Ranveer Singh who recently wrapped up the shooting of his upcoming sports drama '83,' jetted off to Hyderabad to commence shooting for Rohit Shetty's 'Sooryavanshi' on Tuesday.
The actor will be seen playing a cameo in 'Sooryavanshi' alongside Akshay
After the success of 'Simmba' and 'Singham', Rohit Shetty has expanded his cop universe with 'Sooryavanshi'. Akshay's entry was teased in the climax of 'Simmba' as an Anti-Terror Squad chief. This is the first time that Akshay has collaborated with Rohit for a project.
In March, the makers of the film shared the first look of the film. In the poster, Akshay was seen donning a police uniform with a revolver in his hand.
The cop-thriller will bring Ajay Devgn and Ranveer Singh together for cameos.
'Sooryavanshi' is scheduled to hit the screens on March 27, next year and also features Gulshan Grover, Sikander Kher, and others in pivotal roles. (ANI)
ADVERTISEMENT