Always wanted to raise the bar of action films in India: Hrithik Roshan 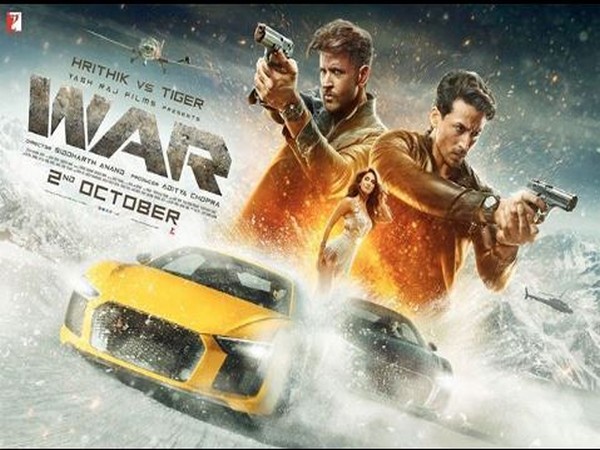 New Delhi (India), Oct 10 (ANI): Overwhelmed by the thunderous response received by 'WAR', Hrithik Roshan said that he always wanted to raise the bar of action films in India.

The high-octane film that sees Hrithik and Tiger Shroff pitted in a massive showdown across 7 countries as they go after each other relentlessly was successful in surpassing the Rs 200 crore mark in just seven days of its release.
Delighted by the response, Hrithik said, "We wanted to make a film that raises the bar of action films in India and could truly compete with the best of action spectacles being made in the West."
"War is a genre-defining action film and I'm extremely happy for the entire cast and crew of WAR because we all have given our all and more to make this film a cut above," he added.
On the other hand, Tiger feels that the success of the film is like a blessing for him and is more close to his heart as he got to play a role with his "inspiration" and "idol" Hrithik.
"It's an absolute blessing that our film has been accepted widely and it's definitely going to be a special one forever because I got to do this with my hero my idol Hrithik Roshan who I aspire to be and who I am inspired by," the 'Heropanti' actor said.
Apart from receiving unanimous love and appreciation from the audience, the actor was touched by the fact that this is his first film in the industry to smash all box office records and score well. "I am blessed that my first 200 is with such an amazing team," he added.
The film now becomes the third highest-grossing movie of 2019, surpassing the business of Salman Khan starrer 'Bharat.'
The film which had the leverage of an extended weekend smashed all records and is continuing its winning spree.
The power-packed action film minted Rs 51.60 crores on the first day followed by Rs 23.10 crores on second, Rs 21.30 crores on third, Rs 27.60 crores on fourth, Rs 36.10 crores on fifth, Rs 20.60 crores on sixth and Rs 27.75 crores on the seventh day, taking the tally to Rs 208.05 crores.
'War' has created seven new records including that for a Gandhi Jayanti release, a film released in Navratri and the highest-grossing first 3-day for Hrithik Roshan, Tiger Shroff and Siddharth Anand, who is the director.
Lastly, this is the fifth Yash Raj Films to cross Rs 100 crore plus net box-office collection over the third day after 'Dhoom 3', 'Sultan', 'Tiger Zinda Hai' and 'Thugs of Hindostan'. (ANI)
ADVERTISEMENT