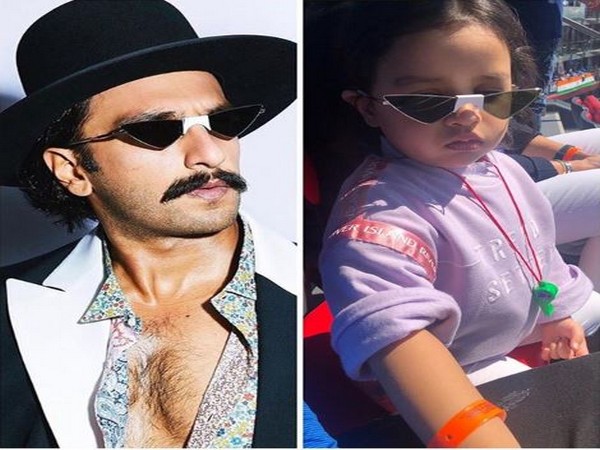 The ace cricketer took to Instagram to share an adorable collage of the two wearing an identical pair of sunglasses.
Dhoni shared a funny anecdote about his four-and-a-half-year-old daughter who came across a picture of the 'Padmavat' actor and realising that she owns a similar pair rushed up to her room and returned wearing the shades.
The cricketer shared a picture and wrote, "Ziva was like why is he wearing my glasses then she goes upstairs to find hers and finally says my glasses r with me only. kids r different these days.at four and a half I won't have even registered that I have similar sunglasses. next time she meets Ranveer I am sure she will say I have the same glasses as urs."After reading the story, a happy Ranveer appreciated the dressing sense of the child and wrote, "Hahahahaha FASHIONISTA Z !!! "
The picture shared by dhoni shows Ranveer, known for his flamboyant style, in a colourful shirt teamed with a black blazer and a black hat.
Meanwhile, the actor who played the role of Murad' in 'Gully Boy' has been picked for the Oscar Awards. The film also stars Alia Bhatt, Kalki Koechlin, Siddhant Chaturvedi and Vijay Raaz in pivotal roles.
The story revolves around Murad (Ranveer), an underdog, who struggles to convey his views on social issues and life in Dharavi through rapping. His life changes drastically when he meets a local rapper, Shrikant alias MC Sher.
The film has received a number of accolades including the NETPAC Award for Best Asian Film at the Bucheon International Fantastic Film Festival, South Korea; and Best Film at the Indian Festival of Melbourne in August this year.
Ranveer will next feature in Kabir Khan's directorial film '83' where he will be seen playing the role of ace cricketer Kapil Dev. (ANI)
ADVERTISEMENT