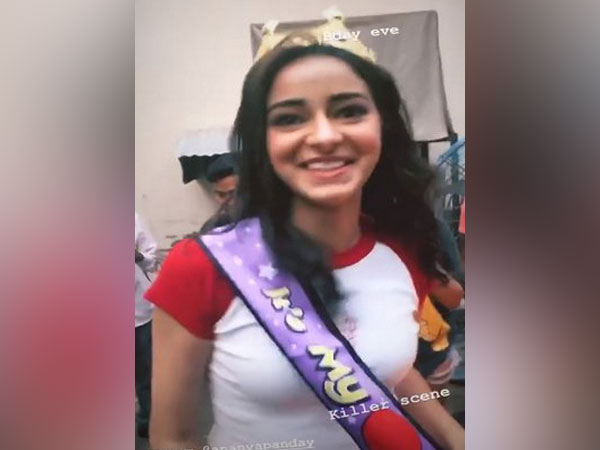 New Delhi (India), Oct 29 (ANI): Chintu Tyagi aka Kartik Aaryan surprised his 'Pati, Patni Aur Woh' co-star Ananya Panday with a delectable chocolate cake on the film's sets a day before she rang in her 21st birthday!
With just a few members of the film's crew, which included co-actor Bhumi Pednekar, Kartik, in a clip shared on his Instagram story, can be heard teasing the 'Student of the Year 2' debutant on the low people turn out for her cake-cutting.

However, Ananya didn't seem to lower her spirits and cheerfully added, "It's my birthday!"
The three will be seen sharing screen space for the first time together where Bhumi will play Kartik's on-screen wife and Ananya will be seen as the other woman!
Apart from the trio, 'Sonu Ke Titu Ki Sweety' actor Sunny Singh has also joined the film's cast. Kartik announced the news on Instagram earlier this month.
Directed by Mudassar Aziz, the film is an adaptation of the 1978 drama of the same name, which featured Sanjeev Kumar, Vidya Sinha and Ranjeeta Kaur in the lead roles.
The original one revolved around a married couple Ranjeet (Sanjeev) and Sharda (Vidya) and how things change after he gets involved with his secretary Nirmala (Ranjeeta).
The upcoming remake is set to hit big screens on December 6 this year. (ANI)