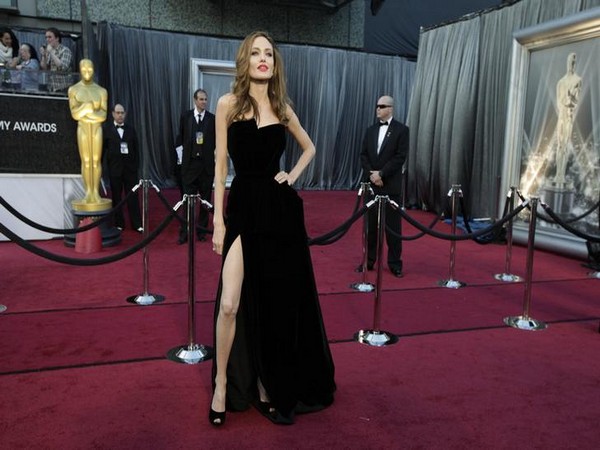 "There's a whole long story behind that," she told Extra of her black Atelier Versace gown, cited People.
"I had a more complicated dress and I wore the more comfortable dress, which was that one, and I think I was just so comfortable that.." she continued.
"I think when you feel comfortable when you feel yourself -- which is very much the theme of the film, and we know this in life -- you embrace it. And sometimes, maybe it appears to be a thing, I don't know," she added.
Jolie first turned heads when she took the red carpet with a hand on her hip and her bare leg stretched out through the slit in her dress and again when she took the stage to present the award for Best Adapted Screenplay at the 2012 Oscars.
As the show ended, the show-stopping moment had gone viral, a Twitter handle called @AngiesRightLeg gained over 14,000 followers in one day, boasting anonymously pinned posts like, "Look at meeee!!" and "You have to admit I'm one hell of a leg."
For Monday night's premiere of her new film 'Maleficent: Mistress of Evil', Jolie chose a second stunning black Versace dress yet again.
"I hope the film speaks for itself," the mom of six told People on the red carpet of the premiere
"I think there are many different types of strength represented for women in this film. It's not just the strength of a fighter, it's the strength of a tactician in Michelle and a leader, it's the strength of a mother-to-be and wife in someone like Elle, who is soft, and her strength is in her heart and her softness," she added. (ANI)
ADVERTISEMENT