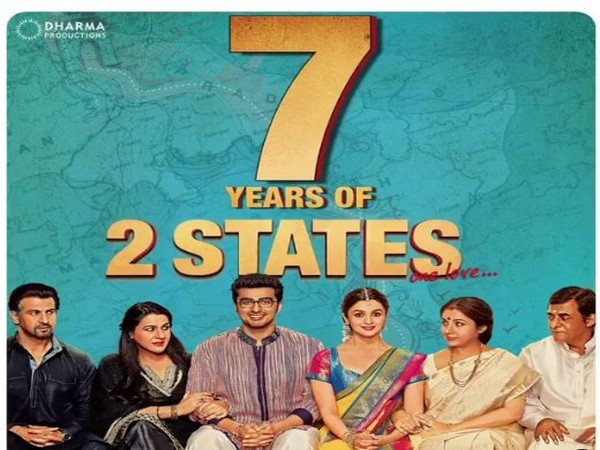 New Delhi [India], April 18 (ANI): As the multi-starrer romantic drama '2 States' clocked 7 years of its release on Sunday, the film's lead actor Arjun Kapoor marked the day by sharing some of the scenes from the movie.

To commemorate the 7th anniversary of the film, the 'Ishaqzaade' actor shared a collage video featuring some of the memorable scenes from the movie.
In the video, the first clip shows Arjun arguing with his on-screen Punjabi mother Amrita Singh and asking her to talk with his on-screen South-Indian girlfriend- Alia Bhatt's family to resolve the matter. To which, Amrita replied, "In which language? I don't know how to speak in Madarasi"
While, the second clip shows both the mothers of Arjun and Alia in a heated argument, proving whose community is better.
The video concludes with the garland ceremony from the on-screen marriage of Alia and Arjun in the movie with Alia's one of the iconic dialogues in the backgrounds that hears, "Baat communities ki nahi..baat ye hai ki kis tarah ki insaan ke sath ..apni jindagi bitana chahte hain".
The 'Gunday' actor captioned the post as, "All you need is love ... especially today. #7yearsof2states #2States". 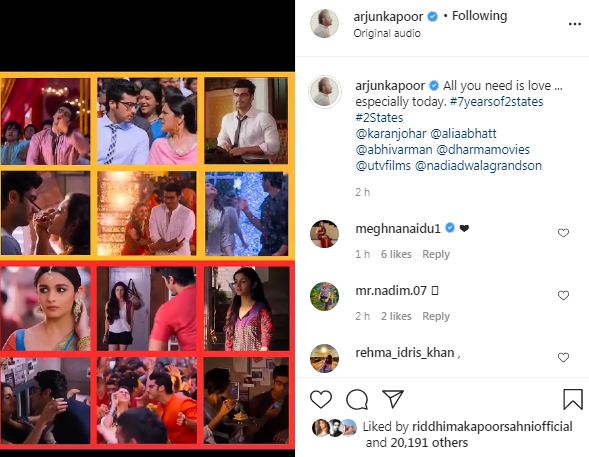 The 2014 delightful romantic drama '2 states' is based on Chetan Bhagat's 2009 novel '2 States: The Story of My Marriage'. Helmed by Abhishek Varman as his directorial debut, the film was jointly produced by Karan Johar and Sajid Nadiadwala under their respective banners Dharma Productions and Nadiadwala Grandson Entertainment.
Featuring Arjun Kapoor and Alia Bhatt in lead roles, 2 States co-stars Ronit Roy, Revathi, Amrita Singh and Shiv Kumar Subramaniam as supporting cast.
The story deals with the terrific chemistry of Krish Malhotra (Arjun Kapoor), a Punjabi boy and Ananya Swaminathan (Alia Bhatt), a Tamilian brahmin girl who met at a premium MBA institute of India, IIM Ahmedabad and how their friendship turned into a love affair. Coming from two very different cultural backgrounds, Krish and Ananya try to convince their parents to bless their relationship before they get married.
Distributed by UTV Motion Pictures, '2 States' was praised for its music, cast performances, story direction, thus emerging as a huge critical and commercial success. The recipient of many accolades, the film was nominated in eight categories at the 60th Filmfare Awards winning two awards there: Best Debut Director to Varman and Best Music Director to Shankar-Ehsaan-Loy. (ANI)
ADVERTISEMENT