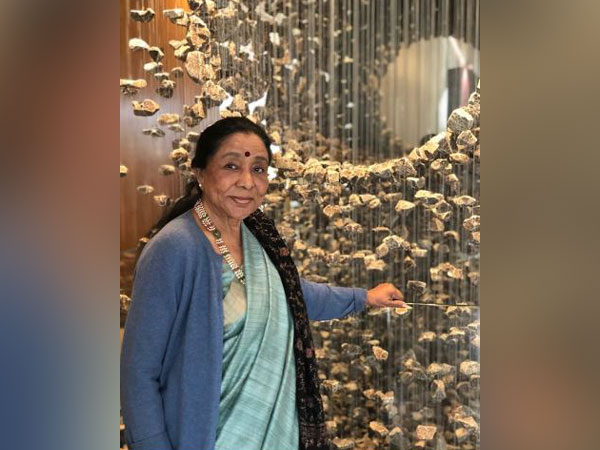 New Delhi [India], Sept 8 (ANI): Legendary singer Asha Bhosle, who turned 86-years-old on Sunday, took a trip down memory lane by posting the picture of a card she received from Canadian Prime Minister Justin Trudeau on her birthday last year.

"On my 86th birthday, I feel happy that my achievements have put India on the world music map where world leaders acknowledge my presence. Thank you to PM Trudeau of Canada Justin Trudeau," Bhosle tweeted, along with the picture.
Trudeau's card read, "It's a great pleasure to send you best wishes and warmest congratulations on the occasion of your eighty-fifth birthday." 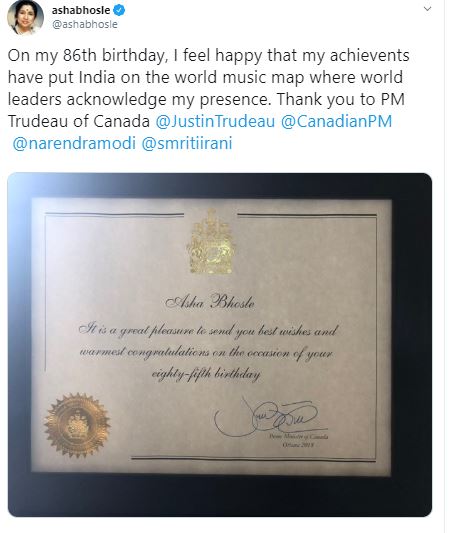 The singer who celebrated her birthday last night in Dubai with several well-wishers went live on Twitter to document her celebrations.
She looked as beautiful and radiant as ever in a blue and pink saree. Bhosle took a moment to thank everyone before cutting the birthday cake.
Fondly called 'Asha Tai', the songstress is best known for playback singing in the Hindi cinema. She was born on September 8, 1933, in a small town named Goar in Sangli, now in Maharashtra.
The legendary singer's career started in 1943 and has spanned over six decades. She has done playback singing for several Bollywood movies. In addition, she has recorded several private albums and songs. Bhosle has also participated in numerous solo concerts in India and abroad.
In 2011, she was acknowledged by the Guinness Book of World Records as the most recorded artist in music history.
The singer has provided playback for smash hits like 'Parde Mein Rehne Do', 'Piya Tu Ab To Aaja', 'Dum Maro Dum', among many others.
Bhosle has been a recipient of the Dadasaheb Phalke Award in 2000 and the Padma Vibhushan in 2008. (ANI)
ADVERTISEMENT