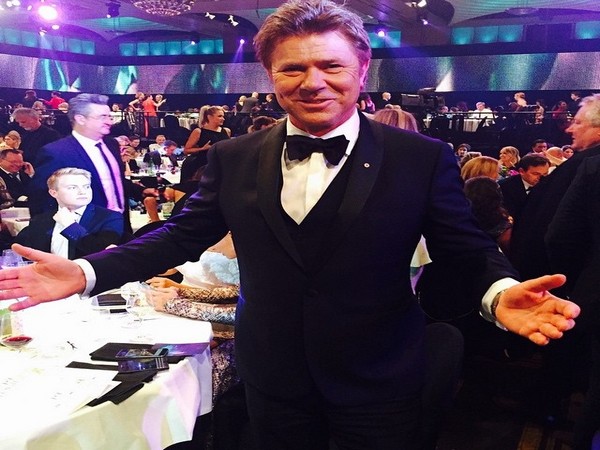 According to Page Six, Nine Network entertainment editor Richard Wilkins said after confirming he contacted COVID-19: "I bet Tom and Rita feel bloody terrible."
The 65-year-old 'Weekend Today' host said that he only got tested after Tom Hanks and his wife Rita Wilson announced they were tested positive for COVID-19 last Wednesday.
It was on late Sunday that Wilkins was told that he also had the disease. That forced his celebrity son Christian Wilkins to also get tested and take a break from the Australian version of 'Dancing With the Stars.'
The two Nine hosts, David Campbell and Belinda Russell, who also interviewed Wilson in their Sydney studio on March 9, remained in isolation in their homes on Monday waiting on test results.
Wilkins told his station in a FaceTime chat that he was "surprisingly very well" and did not feel sick.
He said from his home in Sydney: "You could've knocked me over with a feather last night when I got that call. It took me a couple of minutes to reel from the news that they gave me. But I feel fine. I feel 100% ... I feel terrific."
He met Wilson twice in the week leading up to her own diagnoses-- at the Sydney Opera House on March 7 and again at Nine's Sydney studio on March 9.
Wilkins said from his home in Sydney: "We're assuming this is from Rita, but it may not be. They've all said it could be anyone, anywhere, any time such is the prevalence of this thing."
He shared that he was having a chat to her and that's probably the best guess as to what happened. He added that he would not have sought testing if not for meeting her.
Wilkins also shared that he did not inform his son until after he had danced on the reality TV show, which is currently being filmed without a studio audience because of the pandemic.
The father said that "I called him up after his show last night and "he was -- and still is -- very, very upset."
He also told that Christian was also going to get tested in an hour and he hopes that he will be okay. Wilkins also said, "The ripple effect of this thing is enormous. I pray to God that nobody else has got it from me." (ANI)
ADVERTISEMENT