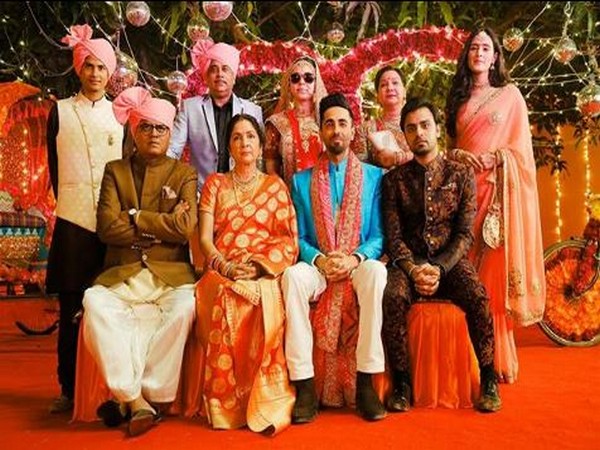 New Delhi [India], Jan 23 (ANI): After dropping a fun-filled trailer of his romantic comedy 'Shubh Mangal Zyada Saavdhan', actor Ayushmann Khurrana on Thursday shared a 'family picture' with the cast of the film.

The actor took to Instagram on Thursday to share a wedding theme picture featuring the cast of the film including Neena Gupta, Gajraj Rao, Manurishi Chaddha, Maanvi Gagroo and the lead duo of Khurrana and Jitendra Kumar.
"A family that poses together, slays together! #ShubhMangalZyadaSaavdhan," Khurrana captioned the picture.
The same photograph was also shared by senior actor Neena Gupta who is playing a pivotal role in the film.
The film which is a light-hearted comedy can be seen as a progressive attempt towards the acceptance of same-sex couples - an issue that continues to remain a taboo in India even after a year of its decriminalisation by the Supreme Court.
Helmed by Hitesh Kewalya and produced by Bhushan Kumar, the film is the second installment of the much-acclaimed 'Shubh Mangal Saavdhan' film which was released in 2017.
The romantic comedy flick with a powerful message is set to hit the big theatres on February 21. (ANI)
ADVERTISEMENT