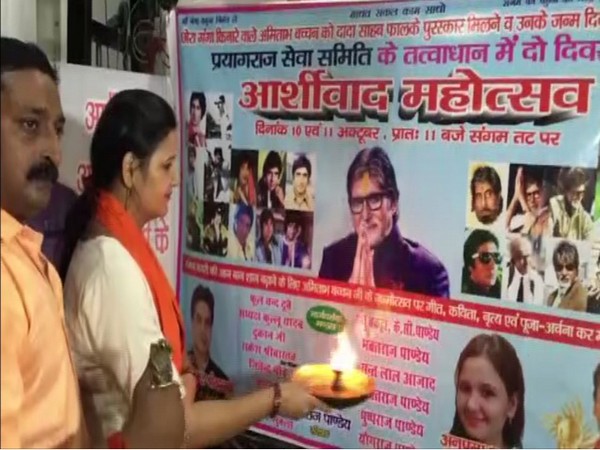 Prayagraj (Uttar Pradesh) [India], Oct 11(ANI): As Bollywood megastar Amitabh Bachchan turned 77 today, a sea of fans were seen being immersed in the spirit of celebration.

The fans in Prayagraj, the city where the star was born, celebrated the occasion in a different way.
The fans pasted a huge poster of the veteran actor in an area in the Sangam city and performed puja while praying for his good health.
One of the fans and founder of Prayagraj Seva Samiti, Teerthraj Pandey also planned to organised an 'Ashirwad Mahotsav' in the city to pray and honour the star for his great work in the Indian cinema.
"The actor who has never failed to impress us with his phenomenal work and who has brought fame to the city of Prayagraj with his great achievements, this makes our bond even more strongly with the actor. So we shall seek blessings from several God and Goddess for Amitabh Ji and his long life," said Pandey.
Born on October 11, 1942, the megastar Amitabh Bachchan is one of the best-known and most respected artists in the country.

The recipient of Padma Shri and Padma Bhushan has recently been selected for the Dadasaheb Phalke Award by the Union Minister Prakash Javadekar.

He was also honoured with Padma Vibhushan - the country's second-highest civilian honour - in 2015.

Last seen onscreen in 'Badla', Bachchan is a recipient of four National Film Awards for his roles in 'Agneepath', 'Black', 'Paa' and 'Piku'. He made his acting debut in 1969 with 'Saat Hindustani.' (ANI)
,
ADVERTISEMENT