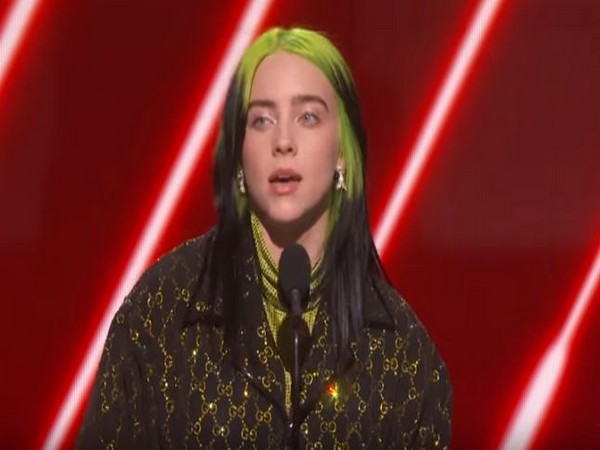 Washington D.C [USA], Jan 27 (ANI): The Grammys bought much glory to music sensation Billie Eilish, who bagged the best pop vocal album and also swept four big titles - Best New Artist, Record of the Year, Album of the Year and Song of the Year at the awards in Los Angeles on Sunday (local time).

The 18-year-old became the youngest solo performer to ever win album of the year. In total she bagged five Grammys this year.
In her acceptance speech Eilish said "Mainly the fans deserve everything...they have not been talked about much tonight...they are the reason why we all are here at all."
While 'When We All Fall Asleep, Where Do We Go?' won the awards for the Album of The Year and Best Pop Vocal Album, her single 'Bad Guy' brought her the glory with two big awards - Song of the Year and Record of the Year.
Eilish paid respect to the other artists including Lil Nas X and Lizzo who were nominated in the Best Album category.
"I love you all. You deserve this just as much as I do," she said.
The teenaged singer defeated big musicians like Taylor Swift, Ariana Grande, Lizzo, Lana Del Rey and others to take home the award.
Eilish co-writes a majority of her songs with musician-actor brother Finneas O'Connell, who won the Grammy for non-classical producer of the year.
During a talk with the host from the inside videos of Grammys, Billie and her brother revealed that a majority of the song, including 'Bad Guy', 'I love you' was written in the spring-summer of 2018.
"We made an album that we wanted to make and we made it," Billie continued as she said there was no intention behind while making these songs.
"The goal was just to enjoy making the album and enjoying performing it," she stated.
The young talent is one among the most streamed artists, best known for her hits singles 'bury a friend', 'lovely' and 'when the party's over.'
The duo also talked of their wonderful childhood and how supportive and attentive they were towards their needs.
Eilish debuted in the music industry in November 2016 with her widely popular single 'Ocean eyes'. She dropped her debut album 'Don't Smile at Me' in August 2017.
The album contains hit singles 'Bellyache', 'Ocean eyes' and 'idontwannabeyouanymore'.
She received six nominations for the Grammy 2020: Record of the Year (Bad Guy), Album of the Year (When We All Fall Asleep, Where Do We Go), Song of the Year ( Bad Guy), Best New Artist, Best Pop Solo Performance (Bad Guy), and Best Pop Vocal Album (When We All Fall Asleep, Where Do We Go).
On the professional front, she has been signed up to sing the latest James Bond theme song - the title tune of 'No Time to Die'. (ANI)
ADVERTISEMENT