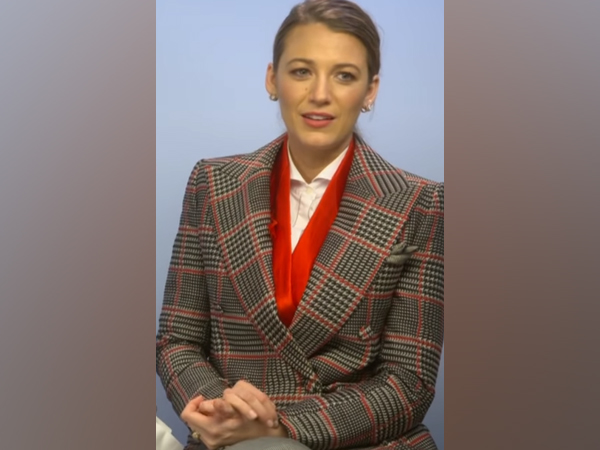 Washington D. C. [USA], Jan 30 (ANI): James Reynolds is the newest and cutest addition to the Jimmy Fallon fan club.
According to E! News, Blake Lively and Ryan Reynolds' daughter is super starstruck by the late-night host, shared Blake while she was at Jimmy's show on Wednesday.

Blake and Ryan's daughter previously in 2016 had addressed Jimmy as dada during a hilarious and heart-warming video. The adorable act happened as Jimmy gifted Blake a cardboard cut-out of himself and later Lively noticed James giving the cut-out a kiss while she referred to Jimmy as her dad!
This time when Jimmy asked about James on 'Wednesday night', Blake shared the host, "We gotta stay away from you, Jimmy."
"She is so intimidated by you," The 'Rhythm Section' star shared, also adding that her 5-year-old daughter was too shy and nervous to come to the show.
Blake revealed that James, who is featured in her BFF Taylor Swift's song 'Gorgeous', is more of fan of Jimmy than Swift!
"She's like buddies with Taylor Swift, no problem, Jimmy Fallon, can't speak," Blake told the host. "You are Beyonce to her. She's very, very, very intimidated."
James is the eldest among Blake and Ryan's three daughters. They also have a 3-year-old Inez Reynolds and have recently welcomed a third daughter. (ANI)
ADVERTISEMENT