In the pictures shared by Twitter account of SAG awards, the two were seen going in for a hug and exchanging adorable smiles. According to Fox News, the moment followed after their respective wins at the award function. 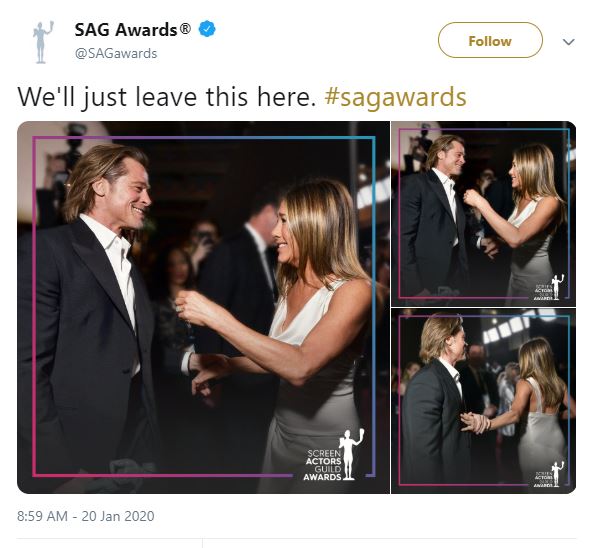 Pitt received the award for Outstanding Performance by a Male Actor in a Supporting Role for his much-acclaimed film 'Once Upon a Time in Hollywood, while Aniston won the award for the category of Outstanding Performance by a Female Actor in a Drama Series for 'The Morning Show'.
In another picture, Aniston was seen touching her ex-husband's chest as he was seen holding her arm.
According to a picture by the Hollywood Reporter, Pitt was seen catching up on Aniston's winning moment and her speech on a screen placed backstage.
Twitterati is going gaga over the cute reunion of the couple ever since the pictures went viral on the micro-blogging site.
The duo that got married in 2000 parted ways in 2005 after Pitt started seeing his co-star Angelina Jolie.
Pitt later married Jolie in 2014 which further led to a split in 2016 and the couple got divorced in 2019.
Over the course of time, the two exes have been in touch and have remained friendly. In February 2019, Pitt was also seen attending Aniston's 50th birthday party. (ANI)
ADVERTISEMENT